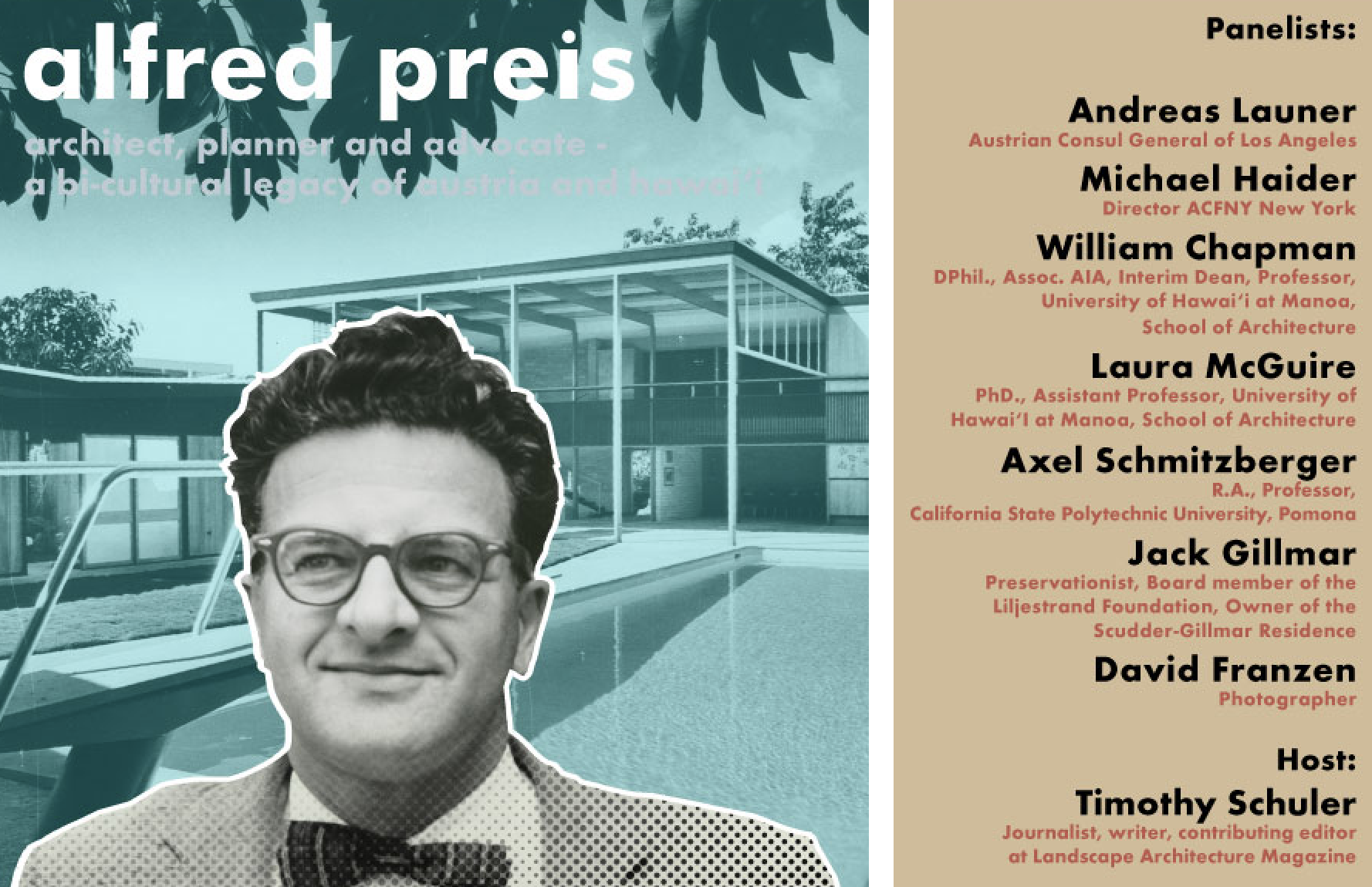 ABOUT THE PANEL DISCUSSION

Register here in advance for this online event.

To celebrate the prolific and varied work and life of the Austrian-Hawaiian modern Architect Alfred Preis on the occasion of his 110th birth year, we invite you to visit a specially curated online exhibition and participate in the accompanying panel discussion with a via zoom, featuring the ACFNY Director Michael Haider as a participating panelist.

The event is curated by Axel Schmitzberger & Laura McGuire with the support of the Austrian Consulate General in Los Angeles and hosted by the University of Hawaii at Manoa School of Architecture.

AUSTRIAN ÉMIGRÉ, MODERNIST AND ARCHITECT OF THE USS ARIZONA MEMORIAL AT PEARL HARBOR

This exhibition is dedicated to the fascinating life story and oeuvre of the US-Austrian architect Alfred Preis (1911-1993). Born, raised, and educated in Vienna, Preis had to flee from Nazi-occupied Austria in 1939 and he emigrated to Honolulu. Briefly imprisoned as “enemy alien” after the United States entered World War II, he emerged as one of Hawaii’s leading architects in the 1950s and 60s. His celebrated career spanned over twenty-three years and comprised almost 180 built projects ranging from residences, schools, and parks – to the famous USS Arizona Memorial at Pearl Harbor. Merging Vienna’s distinctive modernism with Hawaii’s cultures and climate, Preis forged intriguing, novel idioms for modern architecture and design in the tropics.

One of the reasons Alfred Preis has not been known to a wider international public until now may be because he worked almost exclusively in the remote Hawaiian archipelago.

Secondarily, Preis’s decision to leave architecture behind – at the peak of his career – and to dedicate himself to an advocacy role as founder and president of the State Foundation for the Culture and the Arts in Hawaiʻi (1963 to 1980), increasingly removed him from the eyes of architectural critics and historians.

This exhibition, on the eve of Alfred Preis’s 110th anniversary in 2021, is the first major effort to bring this US-Austrian architect back into the international spotlight by capturing, illustrating, and contextualizing the wide spectrum and influence of his prolific work.

This exhibition was initiated by and is organized under the auspices of the Austrian Consulate General in Los Angeles as part of a program series highlighting the major contributions of Austrian emigres from Nazi-occupied Europe to US culture.