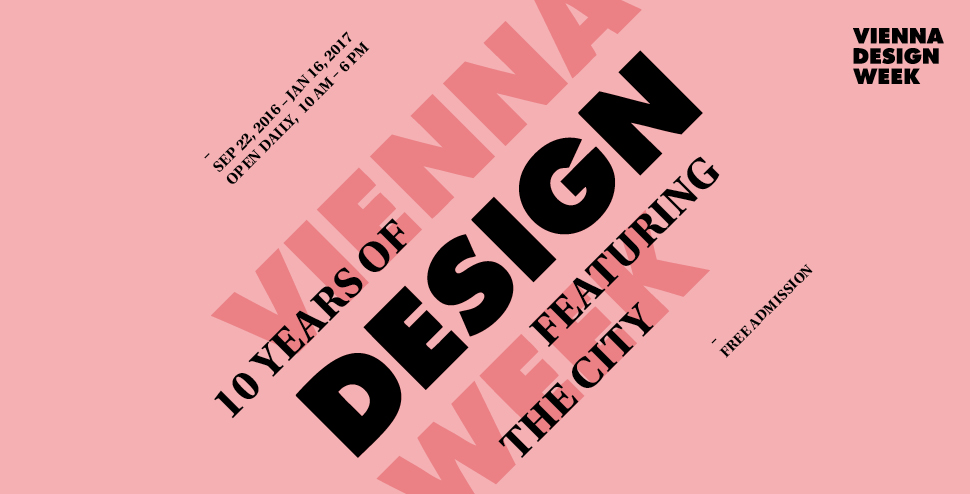 Please join us for the opening reception of our fall exhibition, a ten-year retrospec­tive of Vienna’s largest and most influential design event, VIENNA DESIGN WEEK. The multifaceted exhibition 10 Years of VIENNA DESIGN WEEK featuring the City will explore the history, structure, and impact of the non-profit event, which has brought renowned international designers to the city, provided a platform for the vanguard of Austria’s young designers, and pushed leading design out of Vienna’s galleries and into the streets of its outer districts. The exhibition will be accompanied by a 400-page publication, chronicling the first ten years of the festival.

ABOUT THE EXHIBITION
Rather than a showcase of luxury goods, VIENNA DESIGN WEEK has served as a comprehensive forum for ideas, applications, and objects of design through its program structure since its inception in 2007. Founded under the principle and slogan “A City Full of Design,” VIENNA DESIGN WEEK operates with a rotating series of venues, and different headquarters for each edition, welcoming more than 36,000 annual visitors. The festival recalls and reinvigorates the city’s history as an international hub of design and architecture by pairing foreign designers with Aus­trian manufacturers under its Passionswege (“paths of passion”) events to rethink their potential and processes, while its Focus District looks within Vienna itself, spotlighting local designers. Its debut program pro­motes educational institutions in challenging new realms of design, while Stadtarbeit highlights the work of individual designers − selected by a juried panel of curators − exhibiting in repurposed spaces. Following this tradition, 10 Years of VIENNA DESIGN WEEK featuring the City will present, alongside a collection of noted designer objects, goods, and furniture from VIENNA DESIGN WEEK, a comprehensive history of the relationships the festival has built, and concepts it has revealed.