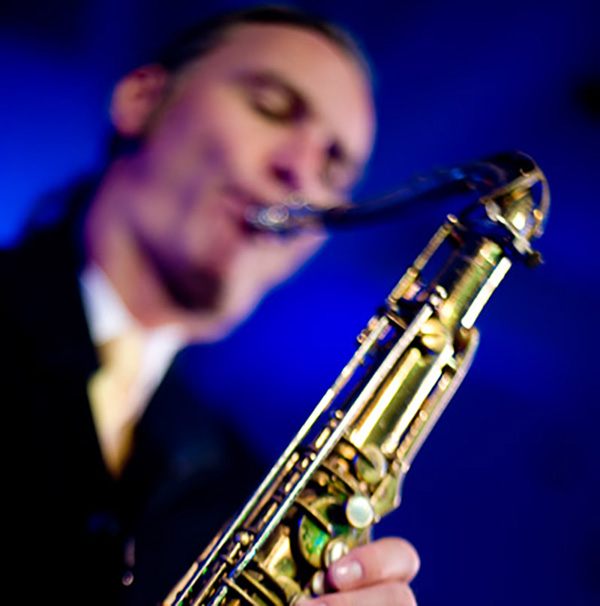 June 21, 2021 | Make Music New York is New York City’s only music festival for the people and by the people!

Watch the recorded concert in front of our entrance here:

In the last few decades the world has got smaller. Speedy means of travel and communication, along with the desire to explore foreign cultures, have been the main contributors. The ensemble DREAMHUNTER has taken this world view as a challenge to create a new world music, blending Jazz, European Classical and Romantic Music and Folk Music.

Gottfried Stöger, saxophonist and woodwinds specialist, composer & founder of “DreamHunter” began his musical training in Salzburg/Austria and later made his way to New York City to explore the world of Jazz. He continued his studies in jazz programs at the Manhattan School of Music in New York and the University of Miami. His world travels as a musician lead to creative collaborations with major folk artists from India, Brazil, Indonesia and Eastern Europe. In the last few decades the world has got smaller. Speedy means of travel and communication, along with the desire to explore foreign cultures, have been the main contributors. The ensemble DREAMHUNTER has taken this world view as a challenge to create a new world music, blending Jazz, European Classical and Romantic Music and Folk Music.

Pianist Walter Fischbacher is a multi-hyphenate artist based in New York City. Hailing from Austria, Mr. Fischbacher has been a New Yorker by choice since 1994. After classical and jazz piano studies in Vienna he decided that he needed to go deeper, to get to the source of jazz and relocated to New York. Piano is his first discipline, and as a pianist Fischbacher has been busy touring the world. His most recent album titled “Moments” is his first solo effort in an illustrious career as band leader, sideman, and duo partner. ()

Marcos Varela is active in the New York music scene and has made a name for himself as one of the most in-demand bassists in NYC and worldwide. Working as a sideman with such artists bands such as; The Mingus Big Band, Ingrid Jensen, Nasheet Waits, Antoine Roney, Kendrick Scott, Jason Moran, Frank Lacy, Vincent Gardner, Geri Allen, Billy Hart, Charli Persip and Leslie Odom Jr. to name a few. Varela released his debut album San Ygnacio on Origin Records. Legendary bassist Ron Carter contributed to the liner notes, saying Varela’s “Tone, Choice of Notes and Compositions will place his playing and name on the list of bassists to be heard.” Varela led an All-Star band in performing the album at the historic Jazz á Liège Festival in Liege, Belgium, and also led an all-star quartet at Prishtina’s Jazz Week in Kosovo in March 2020.

Peter Kronreif, born and raised in Salzburg, Austria, studied Jazz at Bruckner Conservatory in Linz with Doug Hammond and Jeff Boudreaux. As a young player, he gained a lot of experience performing with jazz greats in the European scene. He went on tour in over 20 nations, working with, amongst others, Harry Sokal, Matthieu Michel, Johannes Enders, Alegre Correa, and S.K. Invitational. In 2010 he was awarded the Hans-Koller-Prize as “Sideman of the Year 2009“. . In NYC he leads the group “Peter Kronreif WAYFARERS” which will release their 2nd album this coming summer; otherwise Peter is a busy Sideman in the NYC scene and has been working with artists like Remy LeBoeuf, Seamus Blake, Aaron Parks, Matt Brewer, Randy Brecker, Donny McCaslin, Thana Alexa, Christos Rafalides, Jaleel Shaw, just to name a few.