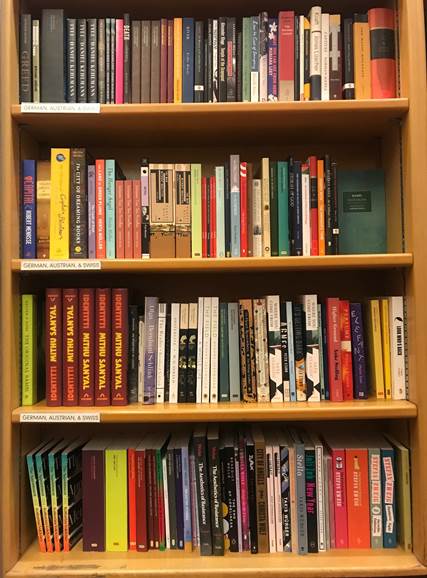 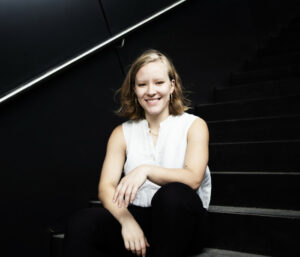 Raphaela Edelbauer was born in Vienna. She studied Language Art (Sprachkunst) with Robert Schindel at the University of Applied Arts Vienna. In 2018, she won the Rauriser Literature Prize for Explorers and was winner of the public’s vote at the Bachmann Prize. Her first novel, The Liquid Land, was published by Klett-Cotta in 2019. It was shortlisted for the German Book Prize and longlisted for the Austrian Book Prize. She’s the winner of the Austrian Book Prize in 2021 for her second novel DAVE. Raphaela Edelbauer lives and works in Vienna and writes essays, novels, and plays. Image credits: res.cloudinary 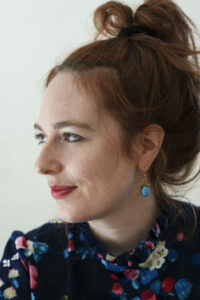 Judith Keller studied German language and literature in Zurich as well as literary writing at the Swiss Literature Institute in Biel and the German Literature Institute in Leipzig. She also studied German as a foreign language in Berlin and Bogotá and was editor of the literary magazine Edit. In 2014, she received the New German Fiction Award for her short story “Wo ist das letzte Haus?” (“The Last House”) which was subsequently translated into English by Katy Derbyshire and published through Readux Books. Judith Keller’s book Die Frag-würdigen (The Questionable Ones), published in 2017 by Der gesunde Menschenversand, won an award from both the City of Zurich and the Canton of Zurich. Die Fragwürdigen was also performed as a theater production and featured as an audio play for Swiss radio. In 2021, Judith Keller’s experimental novel Oder? (Or?) was published by Der gesunde Menschenversand and in 2022, the book Das ramponierte Vertrauen, (The Battered Trust), which features photos by Nicole Zachmann and text by Judith Keller, was published by Vexer Verlag. The Questionable Ones will be published, in English translation by Tess Lewis, by Seagull Books in 2023. Later next year, Verlag Luchterhand will publish a new novel by Judith Keller. Image credits: Jan Frankl

Nora Krug is a German-American author and illustrator whose drawings and visual narratives were published in newspapers and magazines internationally, and included in Houghton Mifflin’s Best American Comics and Best Non-Required Reading series. Krug is the recipient of fellowships from Fulbright, the John Simon Guggenheim Memorial Foundation, the Pollock-Krasner Foundation, the Maurice Sendak Foundation, among others, and of gold and silver medals from the Society of Illustrators and the New York Art Directors Club. Krug was named Illustrator of the Year by the Victoria and Albert Museum in 2019. Her visual memoir, Belonging: A German Reckons with History and Home, about WWII and her own family history, was chosen as a Best Book of 2018 by The New York Times, The Guardian, NPR, and others, and was the recipient of the 2019National Book Critics Circle Award in Autobiography. Krug illustrated the graphic edition of Timothy Snyder’s bestseller, On Tyranny: Twenty Lessons From the Twentieth Century, which was named a Best Graphic Novel of 2021 by the New York Times. Image credits: Nina Subin 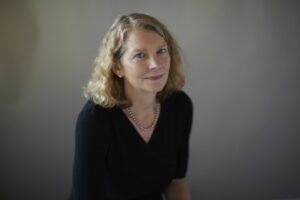 Jenny McPhee is the author of the novels The Center of Things, No Ordinary Matter, and A Man of No Moon, and co-authored Girls: Ordinary Girls and Their Extraordinary Pursuits. Her work has been published in The New York Times, The New York Review of Books, The New Yorker, Bookforum, The Washington Post, Harper’s Bazaar, Glimmer Train, and Zoetrope among others. She is a regular contributor to Air Mail, the digital weekly. Her translations include works by Anna Banti, Massimo Bontempelli, Cristina Campo, Fausta Cialente, Beppe Fenoglio, Natalia Ginzburg, Primo Levi, Curzio Malaparte, Elsa Morante, Anna Maria Ortese, and Pope John Paul II. She teaches creative writing, literary translation, and contemporary global literature at NYU’s School of Professional Studies where she is also an Assistant Dean. She is a visiting lecturer in the Program in Creative Writing at Princeton University. She was awarded a Guggenheim Fellowship in 2020. She co-founded the Bronx Academy of Letters, a NYC public school in 2003. Image credits: Lina Bertucci 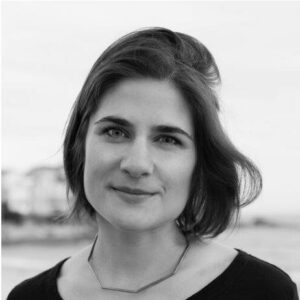 Elisabeth (Liz) Lauffer (moderator) is a German-English literary translator based in New York’s Hudson Valley. She received her B.A. in German Studies from Wesleyan University and her Ed.M. from the Harvard Graduate School of Education. In 2014, she won the Gutekunst Prize for Emerging Translators, which marked the beginning of her career in literary translation. She has participated in the Frankfurt International Translators program (2019), the Artists-in- Residence program through KulturKontakt Austria (2019), the Art OMI: Writers Translation Lab (2018) and recently returned from this year’s ViceVersa translation workshop at Übersetzerhaus Looren in Switzerland. Liz’s forthcoming translations include Juice: A History of Female Ejaculation by Stephanie Haerdle (The MIT Press) and Butterflies by Hermann Hesse (Kales Press). Image credit: Sabine Schwarz

About the Friedrich Ulfers Prize 2022:

The moderated conversation “Express Yourself: Why Writers Write” will be preceded by the 2022 Friedrich Ulfers Prize ceremony. This year’s prize will be awarded to Riky Stock, the Managing Director at NorthSouth Books. The laudation will be held by Barbara Perlmutter. Professor Friedrich Ulfers will also provide short remarks.

The Friedrich Ulfers Prize was established in 2013 and is awarded annually by Deutsches Haus at New York University to a leading publisher, writer, critic, translator, or scholar who has championed the advancement of German-language literature in the United States. The prize, which is endowed with a $5000 grant, has previously been awarded to Jill Schoolman, Susan Bernofsky, Barbara Perlmutter, Barbara Epler, Burton Pike, Robert Weil, Sara Bershtel, and Carol Brown Janeway. The Friedrich Ulfers Prize is Festival Neue Literatur’s testimony to the rising importance of German-language literature in America.

Riky Stock is the Managing Director at NorthSouth Books–the U.S. imprint of Swiss NordSüd Verlag–which publishes high-quality picture books by mostly German-language authors and artists including Marcus Pfister, the creator of the NYT bestselling The Rainbow Fish, and Torben Kuhlmann. Born and educated in Germany, she started her career in publishing in New York City, working for Mary Anne Thompson Associates as a literary scout. Next, she spent two years in the HarperCollins subsidiary rights department, both on the domestic and international side. At HarperCollins, she witnessed first-hand how a bestselling German novel was translated, published and promoted in English. That process was soon something she became actively involved in when she took the job as director of the German Book Office New York, Inc. (later known as Frankfurt Book Fair New York) in 2002. In that role, she worked on several initiatives which aimed to promote German literature in the U.S. She organized fourteen trips for U.S. editors to Germany, invited German and international editors over for programming in New York, founded the U.S. jury for New Books in German, co-initiated the bi-annual GINT Translation Prize for nonfiction, hosted translator workshops, organized launch events, and recommended U.S. publishers, readers, and translators for German titles. While working at the Frankfurt Book Fair New York, Riky Stock’s favorite project was Festival Neue Literatur.

Barbara Perlmutter was born and educated in Berlin and began her career in publishing in New York during the mid-sixties, working at the Joan Daves Literary Agency in New York. At the time, the agency handled the original works of several American authors, like Dr. Martin Luther King, but of great emphasis was the representation of several major German publishers: Suhrkamp, Piper, S. Fischer Verlag and others. Barbara Perlmutter offered their German classics and new young German authors to U.S. publishers for translation into English. It was the high time of Uwe Johnson, Max Frisch, Peter Weiss, Heinar Kipphardt, Hans Magnus Enzensberger, and the all-time bestseller classic Hermann Hesse. From 1978 on, Barbara worked as scout and representative for S. Fischer Verlag (including SFV Theater, Krueger, Scherz). During the following three decades, working for this Frankfurt publisher, Barbara handled the oeuvre of many German classics in need of new agreements, new translations, complicated copyright searches, or even first translations altogether. These included the works of Thomas Mann, Golo Mann, Franz Werfel, Franz Kafka, Elias Canetti, Carl Zuckmayer, Hans Keilson and contemporary authors like Judith Hermann, Reiner Kunze, Wolfgang Hilbig, Gerhard Roth, Julia Franck, Dieter Kühn, and Monika Maron. A three-volume Kafka biography by Reiner Stach (published by Princeton University Press) and the new translation of Alfred Döblin’s Berlin Alexanderplatz (published by New York Review of Books,) were some of Barbara’s recent book projects.

Friedrich Ulfers is Associate Professor of German at New York University. In the past he also served as Assistant Dean of the College of Arts and Science, the German Department’s Director of Undergraduate Studies, Director of the NYU in Berlin Summer Program and Director of Deutsches Haus at NYU. The recipient of NYU’s Distinguished Teaching Medal and Great Teacher Award, and two-time winner of the College of Arts and Science’s Golden Dozen Award for Excellence in Teaching, Ulfers has taught not only in the German Department but also in NYU’s interdisciplinary programs, offering courses that engage a range of interests, including literary theory, continental philosophy, and the relationships between science, literature, and philosophy. Friedrich Ulfers also served as a professor of Philosophy at the European Graduate School in Saas-Fee, Switzerland, teaching an intensive summer seminar on Nietzsche and 20th/21st Century Thought and giving a variety of lectures. From 2006-2009 he was Dean of the Media and Communications Division of the School, and in 2009 he was appointed Professor Emeritus. Friedrich Ulfers received the Heights Colleges Faculty Hall of Fame Award and the Bundesverdienstkreuz (Officer’s Cross of the Order of Merit of the Federal Republic of Germany) for the commitment to German-American relations in the areas of culture and education.

Festival Neue Literatur (FNL) was established in 2009 as a collaborative project of New York’s leading German-language cultural institutions, i.e. The Austrian Cultural Forum New York; the German Consulate General New York; the Consulate General of Switzerland in New York; Columbia University School of the Arts; Deutsches Haus at NYU; and the Goethe-Institut New York. Festival Neue Literatur is the first and only festival to spotlight German-language and U.S fiction together and brings New York audiences new writing from Austria, Germany, Switzerland, and the U.S.

“Express Yourself: Why Writers Write” is presented with support from the German Federal Foreign Office, the German Academic Exchange Service (DAAD), and the Swiss Arts Council Pro Helvetia. 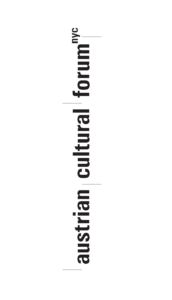