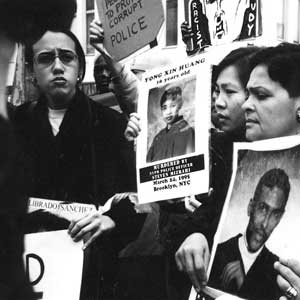 WochenKlausur Features, New York (USA), a project by Vienna-based group WochenKlausur, who are part of the Austrian Cultural Forum’s tenth anniversary exhibition, OUR HAUS, focuses on contemporary positions and practices on the topic of housing and public space.

For the duration of the exhibition (which runs through August 26), nine New York-based organizations, associations, interest groups, and activists who deal with issues of housing and the urban built environment were chosen to use the ACFNY Gallery space for one week each. From August 13 to August 19, CAAAV will be the WochenKlausur “NPO-in-residence” at the ACFNY.

CAAAV (Committee Against Anti-Asian Violence) works to build grassroots community power across diverse poor and working class Asian immigrant and refugee communities in New York City. For the duration of their residence at the ACFNY, CAAAV will show a photo exhibit titled

11 Allen Street: Chinatown Residents Fighting for the Right to Remain in Their Homes.
Photographs by E. Tammy Kim

A photo essay about the show is available >> here.

In New York City, one of the world’s major centers of capital, the buying and selling of land for the benefit of wealthy private interests has become central to the City’s economic development plan. The City’s government and corporate developers have been joining forces to push development projects in the name of spurring “economic opportunities.” These public-private partnerships have used processes like rezoning and the use of eminent domain to remove low-income communities and communities of color.

In the last few years, the City, in partnership with corporate developers, has focused its efforts on Chinatown. Right now, Chinatown’s historical and cultural significance is at stake. New development projects seek to convert Chinatown into a playground meant to attract new, wealthy residents as well as tourists. Such projects have been implemented to the exclusion of long-term Chinatown residents and new immigrants and have facilitated an increasing number of luxury condominiums and upscale shops and services in the community. As a result, Chinatown has seen its affordable housing stock diminish, has lost services and small businesses, and its low-income residents have experienced increased harassment and displacement.

But gentrification isn’t inevitable, and grassroots organizations such as CAAAV are working with residents to preserve the human right to housing. The 11 Allen Street: Chinatown Residents Fighting for the Right to Remain in Their Homes photo exhibit documents the tenants of 11 Allen Street, a building in Chinatown whose landlord is attempting to evict all of the Chinese immigrant tenants from their home of more than 20 years. But the tenants are fighting back against displacement, as these powerful black-and-white photos demonstrate.

CAAAV will screen the film The Fall of the I-Hotel on Thursday, August 16 at 6:30 PM at the ACFNY.