The Austrian Cultural Forum New York is pleased to announce two exhibitions touring from the Jewish Museum Vienna: LESSING PRESENTS LESSING, works by noted photographer Erich Lessing, curated by his daughter Hannah Lessing; and A GOOD DAY, a multimedia installation by Andrew Mezvinsky based on Primo Levi’s account of survival in Auschwitz. Titled THE JEWISH MUSEUM VIENNA ON 52ND STREET, the two shows offer intimate insights into Austrian Jewish life past and present, serving as a platform for discussion, experience and confrontation. Lessing and Mezvinsky on display in one exhibition is a vital symbol of the ongoing, thriving cultural bridge building between Austria and the US.

With their work both artists embrace generations, cultures, and traditions, yet they claim very distinct artistic positions; Andrew Mezvinsky is a young Jewish-American artist who was born in Philadelphia. Having travelled the world, Mezvinsky five years ago chose the city of Vienna to be his centre of life and creative work. Erich Lessing fled Vienna for Palestine in 1939, leaving behind his mother and grandmother who were destined for a Nazi concentration camp. Lessing returned to Vienna in 1945 to become one of the most important Austrian and international photographers, as well as a photojournalist for the Associated Press in 1947, a full member of Magnum Photos and chronicler of the 1956 Hungarian Uprising against Soviet occupation.

Erich Lessing achieved renown through his candid pictures of major political moments of his day, with his documentation of the signing of the Austrian State Treaty, now serving as the iconic symbol of the reformation of Austria as a sovereign state after World War II. His famous portrait subjects included the likes of Dwight D. Eisenhower, John Foster Dulles, Konrad Adenauer and Charles de Gaulle. From the 1960s on he turned his focus to the arts, notably serving as on-set photographer for The Sound of Music starring Julie Andrews, which celebrates its 50 year anniversary in 2015.

The ACFNY will showcase a personal selection by Lessing’s daughter Hannah Lessing also including landscapes in Israel of quasi-biblical dimensions, images of post-war beauty queens, the documentation of daily life in post-war Vienna and sensitive impressions of Jewish customs and ceremonies.

By contrast, American artist based in Vienna Andrew Mezvinsky’s work A GOOD DAY contemplates a single day in Auschwitz in 1944. Inspired by the Jewish-Italian Holocaust survivor Primo Levi’s autobiography If This Is a Man, Mezvinsky depicts Levi’s traumatic experiences in the concentration camp, including a chapter titled “A Good Day”, that describes a day at the end of winter when the first rays of sun heralded a relief from the cold.

Mezvinsky creates series of drawings, reminiscent of fairy tales, or even the figures of Commedia dell’Arte, which he brings to life in animation. What initially appear as idyllic scenes reveal themselves to be poisoned – arising to depict one of the darkest moments in the history of Europe as the Third Reich expands. Mezvinsky approaches the agony of Auschwitz from various perspectives; addressing the yearning for normalcy in the savage reality of an extermination camp, and reflecting on the basic conditions for human survival. His interacting multimedia exhibition, consisting of an animation film and a series of drawings, also with an interactive component, symbolizes liberation and an interminable will to survive.

On their passage through the main gallery of the ACFNY visitors will have direct influence on the numerous interactive elements in the exhibition as motion detectors control the brightness of the room or influence the scenery in Mezvinsky’s drawings.

Christine Moser, Director of the Austrian Cultural Forum New York, is particularly pleased about this cooperation with the Jewish Museum Vienna, and the upcoming exceptional exhibitions coming to New York, under the leadership of its Director, Danielle Spera. This partnership will allow for a dynamic meeting point for contemplation and discussion, creating awareness for Jewish history, religion and culture. 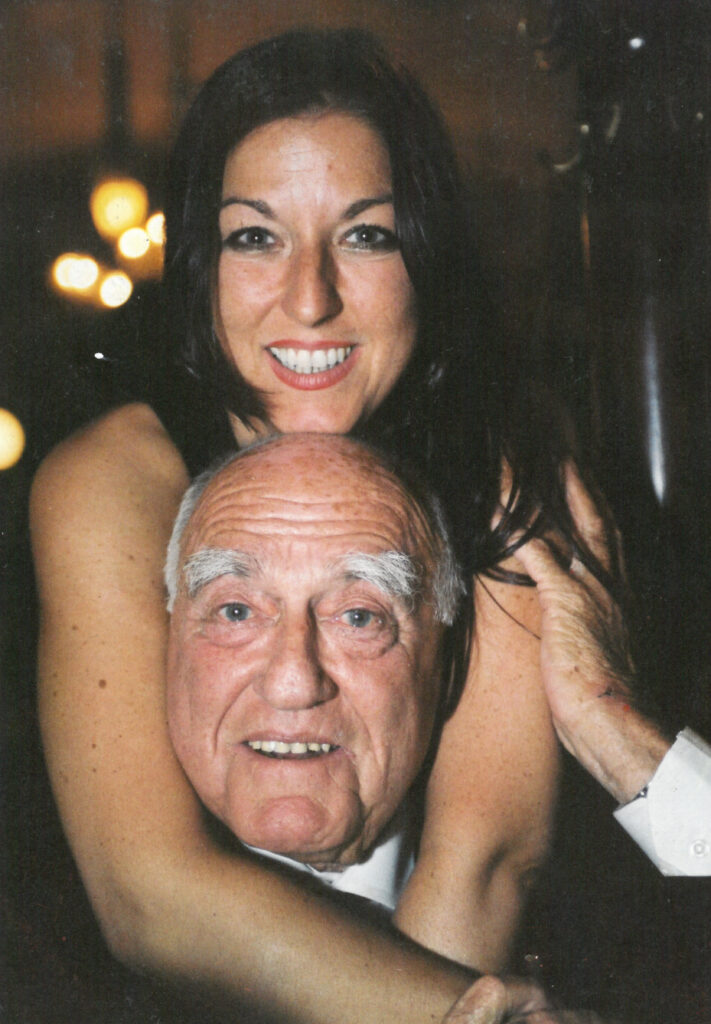 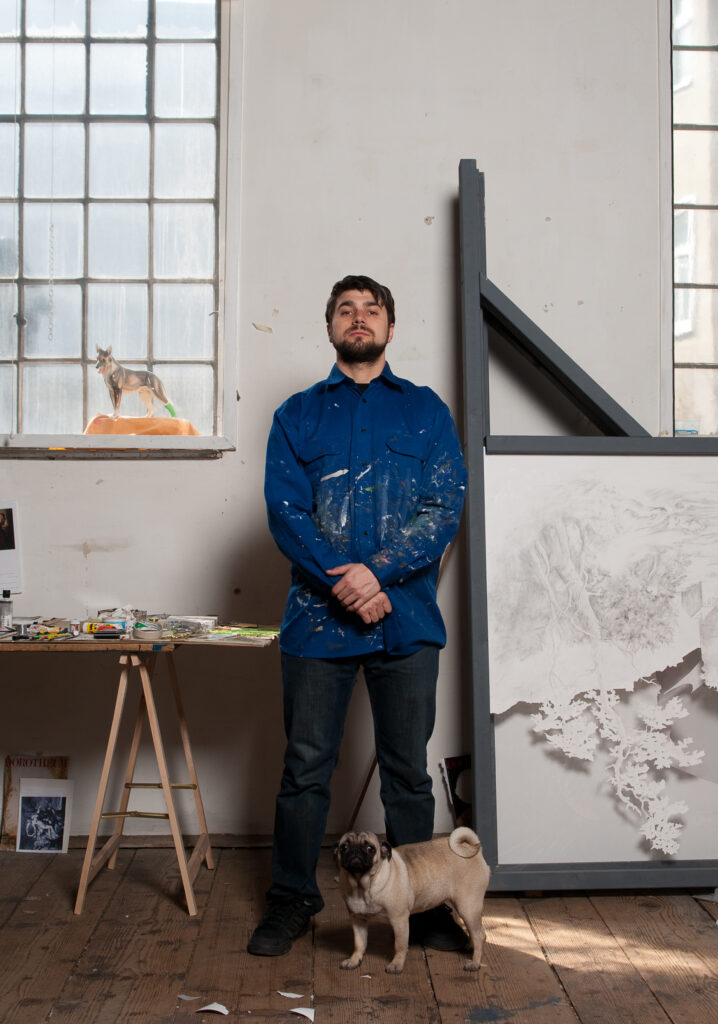 Erich Lessing was born in Vienna in 1923.

He escaped to Palestine in 1939 and studied radio engineering at the Technion in Haifa. In 1947 her returned to Austria and worked as a photo reporter for Associated Press, becoming a member of the photographer cooperative Magnum in 1951. In 1955 he took one of his most famous photos of Foreign Minister Leopold Figl with the State Treaty on the balcony of the Belvedere. After 1960 he turned more to art and history. He has published over sixty art books and has an archive of more than 40,000 color slides. In 2012 he opened the Lessingimages.com gallery in Vienna. He is married with three children and lives in Vienna

Andrew Margolies Mezvinsky was born in 1982 in Philadelphia, Pennsylvania and is currently based in Vienna, Austria.

He uses a large variety of different techniques such as india ink, graphite, oil, pastel, collages and indian dyeing technique and introduces mixed media into his sculptural drawings, paintings and videos. His work has been shown internationally such as at the Biennale di Venezia as a part of the Art group RGB (Slovenia). In 2007 he contributed a fabrication installation for a satellite fair of the Art Basel in Switzerland. Under his direction, in October 2011, “Il Fazzoletto” a contemporary divertimento/operetta, celebrated its premiere at the Institute of Fine Arts in San Francisco. His art is part of many private and museums’ collections such as The Hirshhorn Collection in Washington DC, the Brot Kunsthalle in Vienna, Zanabazar Museum in Mongolia and the Jüdisches Museum Vienna as well as the collections of Jim Lambie (UK), Jane Holzer, (USA) Ernst Hilger (Austria), Albert Baker Knoll (USA), Franz West (Austria) and Bernhard and Elizabeth Hainz (Austria).

This video (in German) shows Andrew Mezvinsky’s exhibition “A Good Day” at Jewish Museum Vienna. Please note that the works shown from 1:02 -1:19 will not be on display at the ACFNY.

Hannah Lessing was born in Vienna in 1963. As a sixteen year old she appeared in the 1978 Emmy Award winning miniseries “Holocaust”. She studied at the Vienna University of Economics and Business from 1981 to 1988 and joined an Austrian bank as a member of the management staff in 1990. In 1995 she became secretary general of the National Fund of the Republic of Austria for Victims of National Socialism. She looks after some 30,000 survivors, seeking reconciliation for them with the state of Austria. Lessing also heads the Austrian delegation in the International Holocaust Remembrance Alliance. In 2001 she became a member of the Austrian delegation at the negotiations on the Washington Agreementon compensation. She is secretary general of the General Compensation Fund for Victims of National Socialism and the Fund for Restoration of Jewish Cemeteries in Austria. She is also involved in the redesign of the Austrian exhibition at Auschwitz-Birkenau.

Danielle Spera was appointed Director of the Jewish Museum Vienna in 2010. From 1978 till 2010 she worked as a journalist, correspondent, reporter, and anchorwoman at ORF-TV Austrian Broadcasting Cooperation. She is the author of numerous books and articles on contemporary art, Jewish topics, and for the magazine NU. Since 2013 she serves as President of ICOM Austria as well as a member of the council of the Medical University Innsbruck/Austria. For the Jewish Museum Vienna she curated several exhibitions including Jewish Geniuses. Warhol’s Jews (2012, together with Astrid Peterle), A Good Day. Installation Andrew M. Mezvinsky (2013), The Südbahnhotel – The Faded Days of the Magic Mountain. Photographs by Yvonne Oswald (2014), and Lessing presents Lessing (2015).

The installation by Andrew Mezvinsky is made possible through generous support from Glimm and Impart Contemporary.

A sincere and special thanks to the dedication and help of lichterloh on the installation of “A Good Day”.