This summer, the Austrian Cultural Forum New York is pleased to present a site-specific art installation by Erste Bank ExtraVALUE Art Award 2019 recipient Gabriele Edlbauer. On display from June 28 to September 8, How much is the fish? views brotherhood in the era of late capitalism through an anthropomorphic lens.

For her first solo show in New York, Gabriele Edlbauer took her inspiration from the eponymous Eurodance hit by Scooter and its opening line “The chase / is better than the catch.” Four figures gather in the space the artist has created, four male “human” bodies with indeterminate “animal” heads resembling those of anteaters or moose. The sculptures appear anonymous, loath to give away who or what they stand for, yet they are united by a common theme: fishing. Surrounded by pools and buckets, the figures proudly display the trophies of a fishing trip, be it piranhas or bass. The viewer faces an idyllic bro scene, albeit one where brotherhood has little to do with the political virtue of fraternity but rather hints at men’s dubious homosocial bonds in the age of pervasive and limitless capitalism.

It is hard to say whether these uncanny figures are engaged in a hobby or a hunt, whether they are adorable idiots dressed in bad carnival costumes or belong to the group of creepy clowns that haunt this era of political unrest. Edlbauer adds another layer of complexity to her installation with a cartoonish mural depicting a second bromantic fishing scene. Placed side-by-side in a boat are four anthropomorphic New York City icons: Charging Bull, Wolf of Wall Street, Mr. Met, and Sparky the Dragon. One may only speculate as what has prompted this incongruous lot to join company. The image seems to reek of machoism and money, while the characters’ rich and sometimes questionable history invites comparison with the nondescript nature of the sculptures.

Cute, zany, and deeply troubling at the same time, all these figures seem much too familiar in our present day and age. In their tameness, they only appear more threatening. Gabriele Edlbauer’s hybrids represent a study in political zoology and ask the audience to engage with complicated feelings in a complicated present. 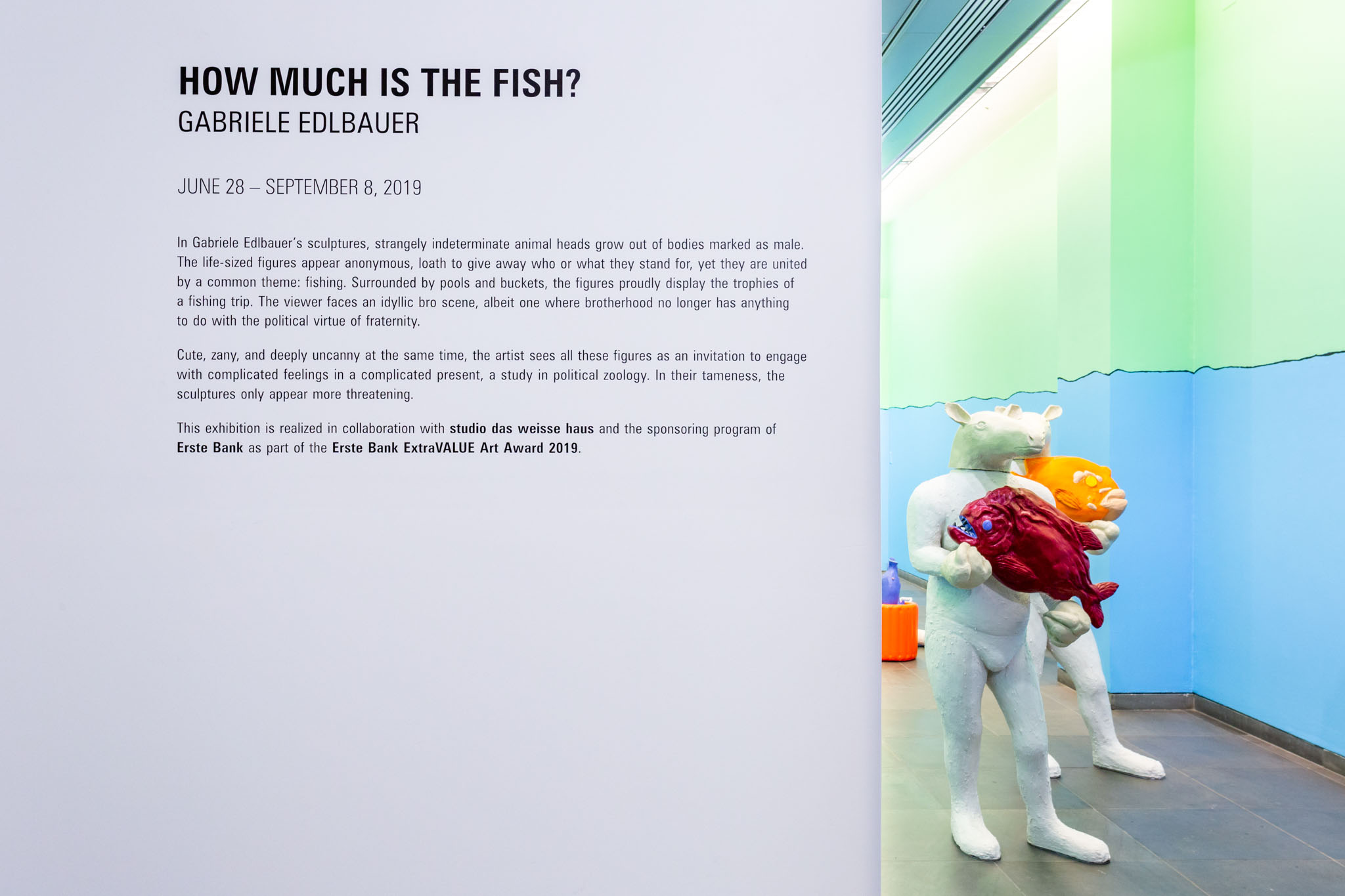 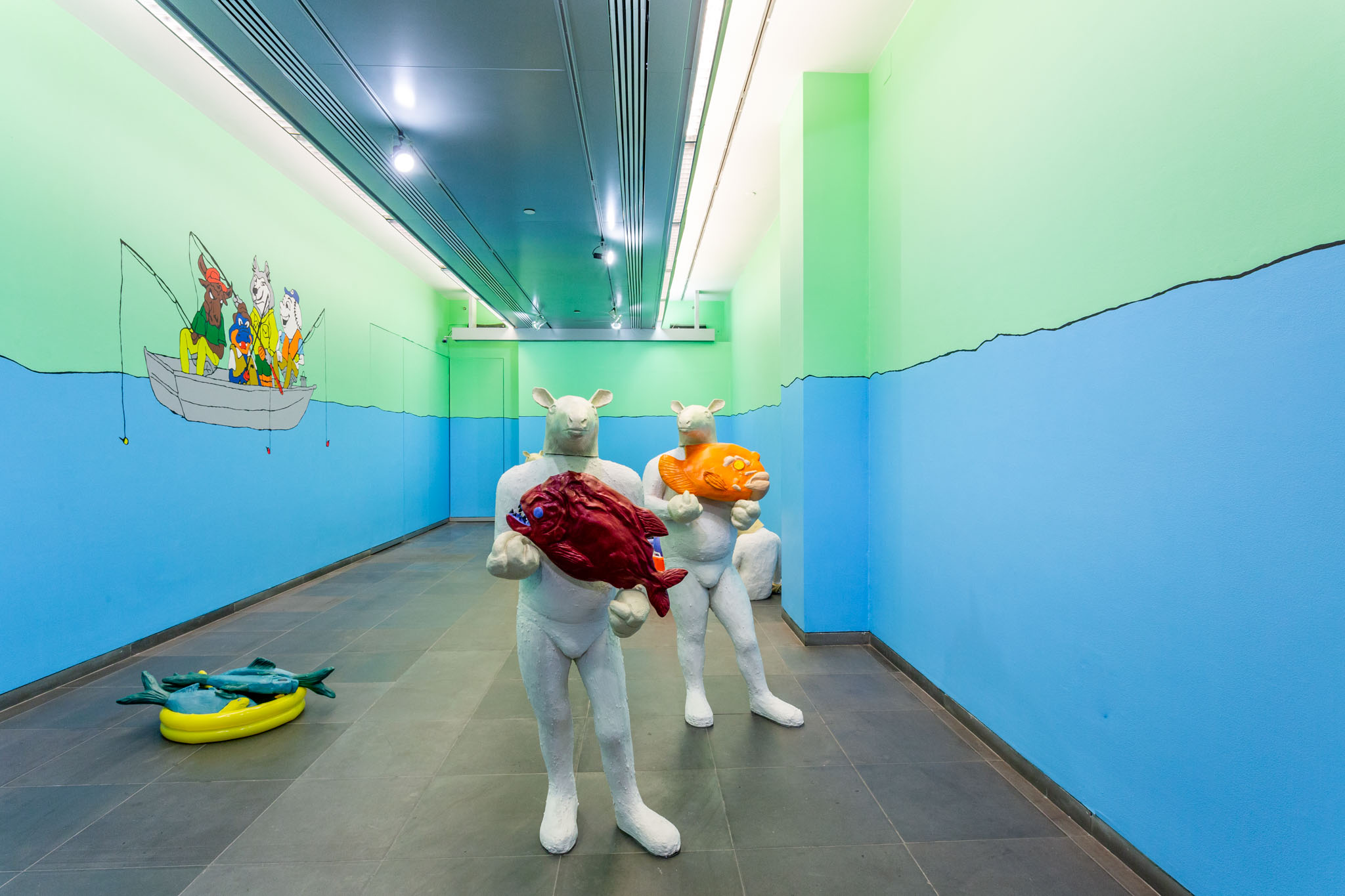 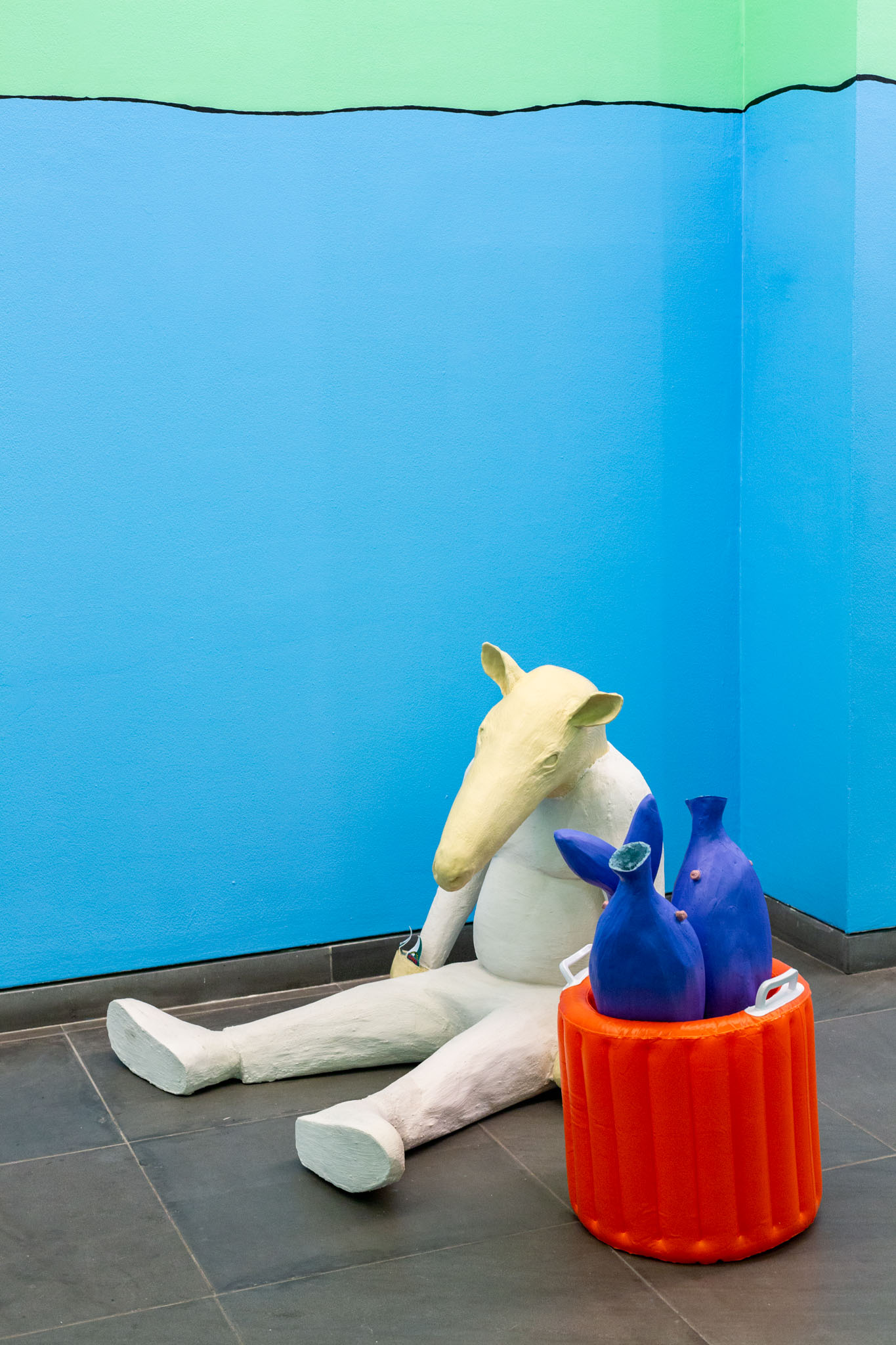 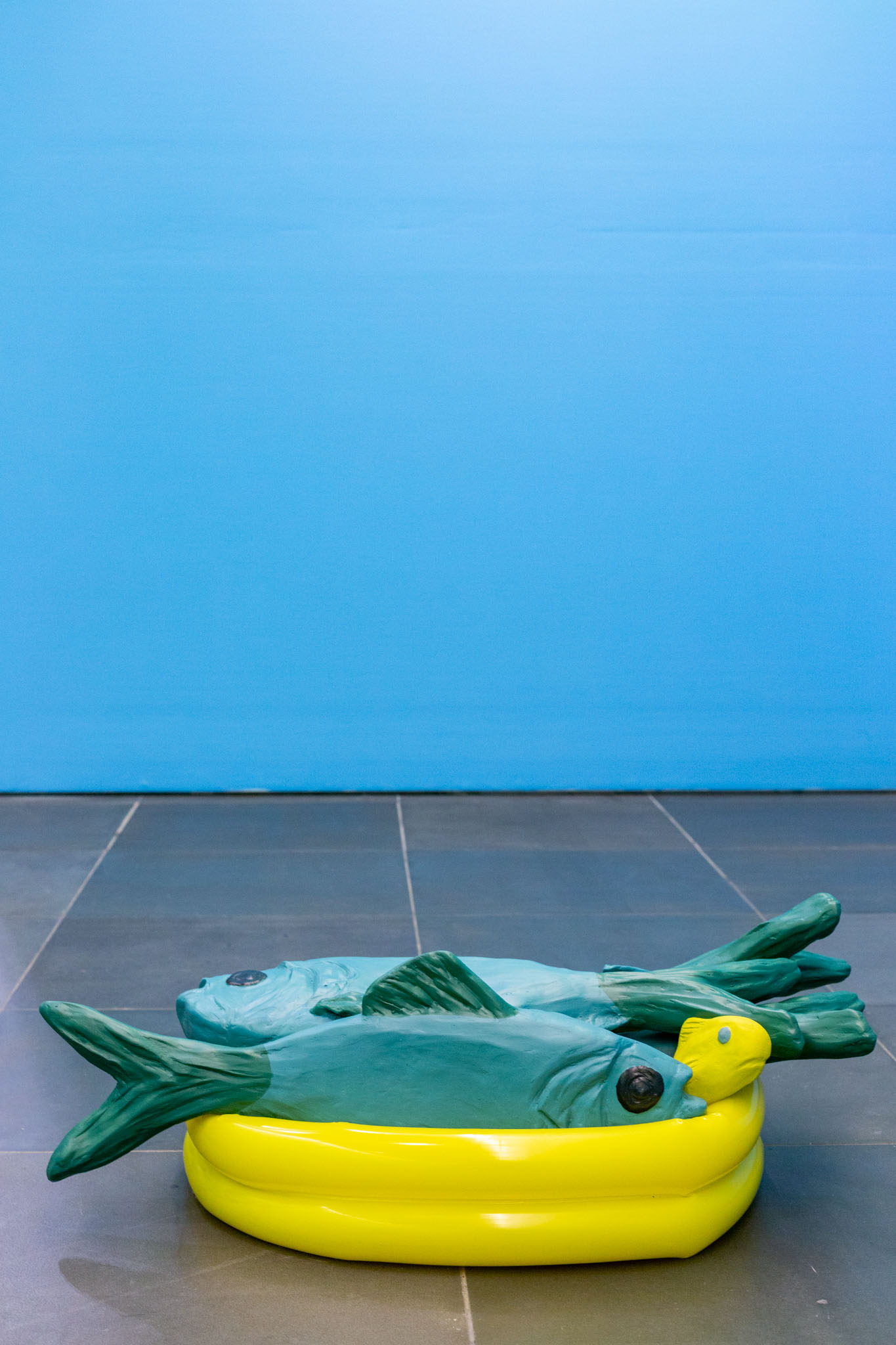 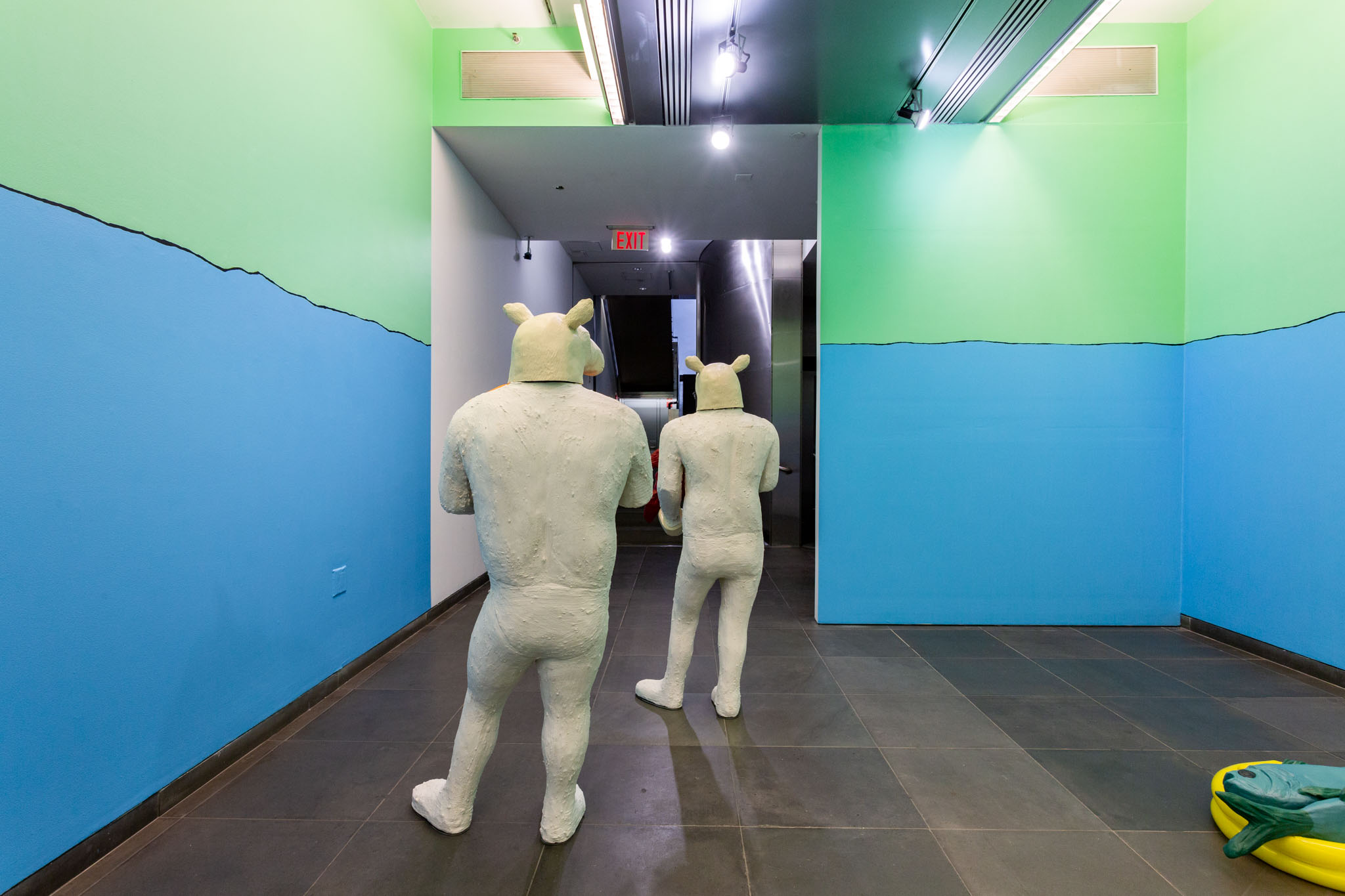 Gabriele Edlbauer (*1988 in Linz/Austria) received her BFA at the Royal Institute of Art Stockholm in 2011 and her MFA at the Academy of Fine Arts Vienna in 2012. She is currently teaching at the University of Applied Arts Vienna. Edlbauer has participated in numerous exhibitions both nationally and internationally including the Luleå Biennial in Sweden, Belvedere 21 in Vienna, Offenes Kulturhaus in Linz, Contemporary Istanbul in Turkey, and Luckman Gallery in Los Angeles. Residencies include, amongst others, Red Gate Residency in Beijing/China, Black Sea Calling in Krasnodar/Russia, and Spread Art in Detroit/US. Edlbauer lives and works in Vienna.

This exhibition is organized in collaboration with studio das weisse haus and the sponsoring program of Erste Bank as part of the Erste Bank ExtraVALUE Art Award. Image Credit: Luca Mercedes Exhibition supported by Esterhazy Winery.