On display from September 25, 2019 to February 17, 2020, the show examines the significant innovations and impact Austrian-American architects had on modern, postmodern, deconstructivist, digital, and post-digital design culture over the past century in the United States. The ACFNY’s gallery will be divided into five themed spaces. The first, Primitive Domains, considers buildings formed of geometric primitives set in the landscape. On the lower mezzanine, the section Aggregate Families explores more modular and complex algorithmic compositions. The main gallery is dedicated to two categories – Urban Terrestrials, which is interested in the contextual placement of buildings within the urban environment, and Cloud Natures, which examines environmental and ecological advocacy in architecture and its design. The fifth and final space, Media Atmospheres, located on the upper mezzanine, highlights architecture’s atmospheric effects on the human condition, including the way we interact and communicate.

In this context, the ACFNY’s iconic building by Austrian-American architect Raimund Abraham appears simultaneously as a showcase and a case study for this exhibition. Described by the curators as a series of primitive trapezoidal geometric forms aggregated into a complex urban tower, it continues to reiterate the significance of works by Austrian-American architects in the global discourse. 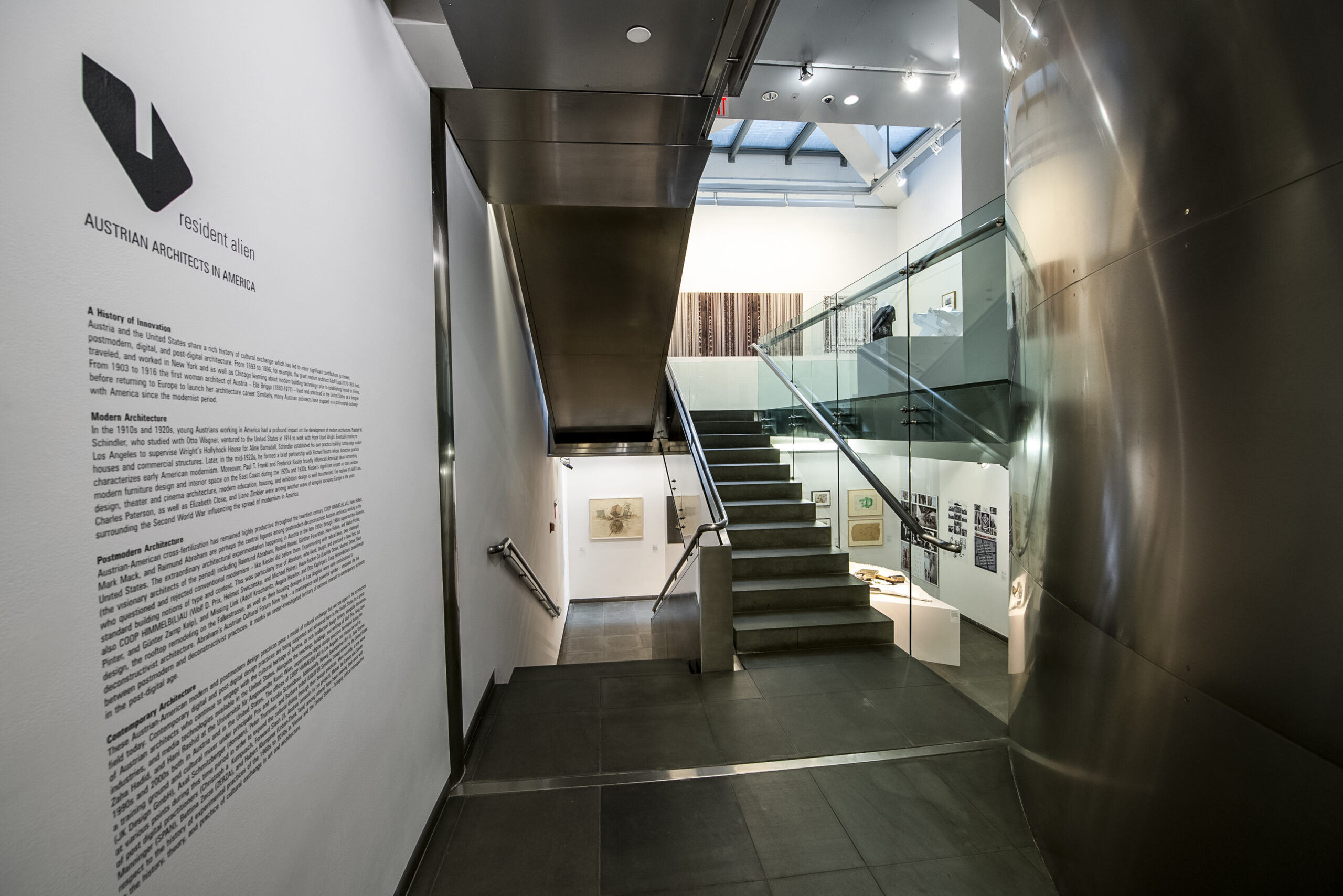 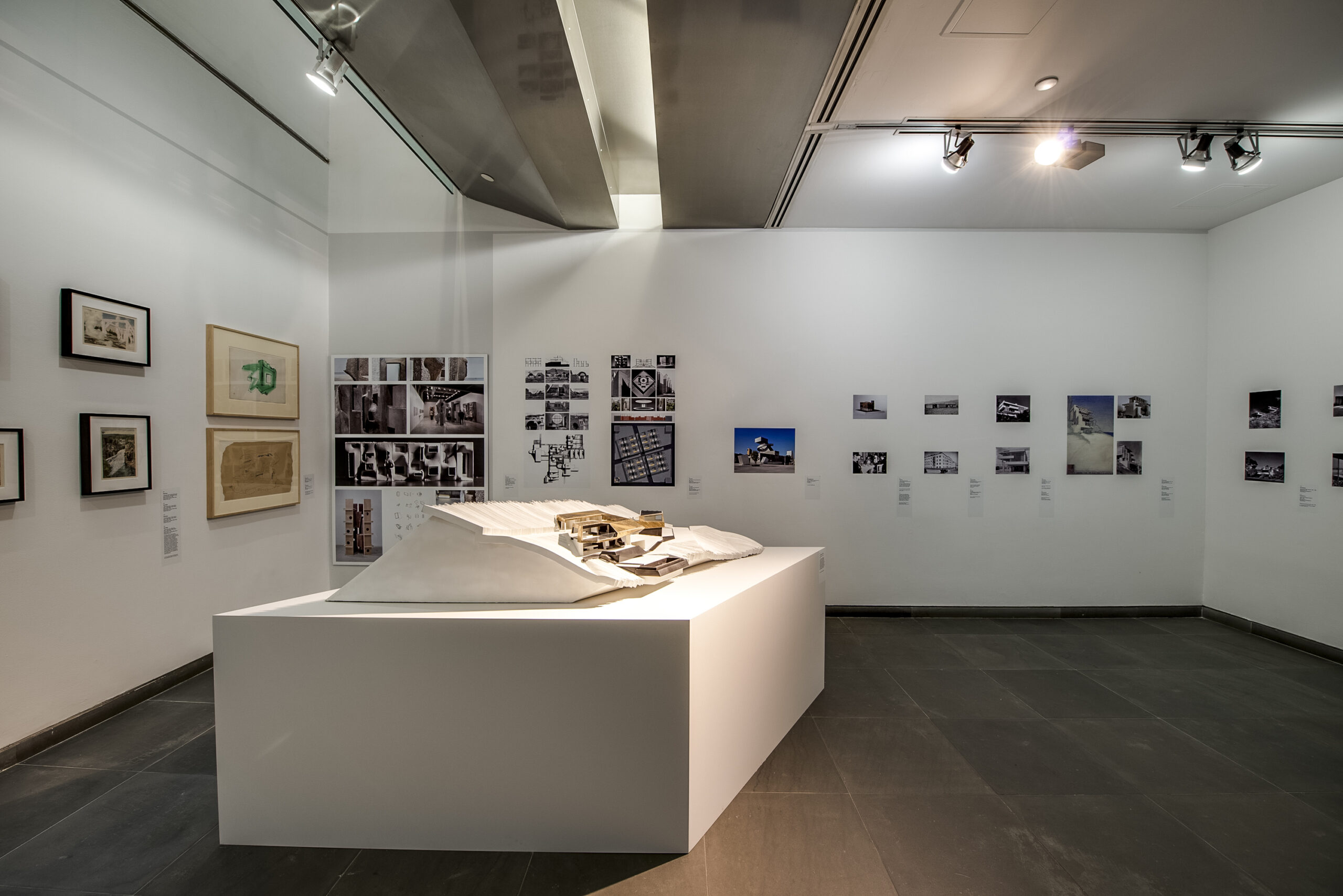 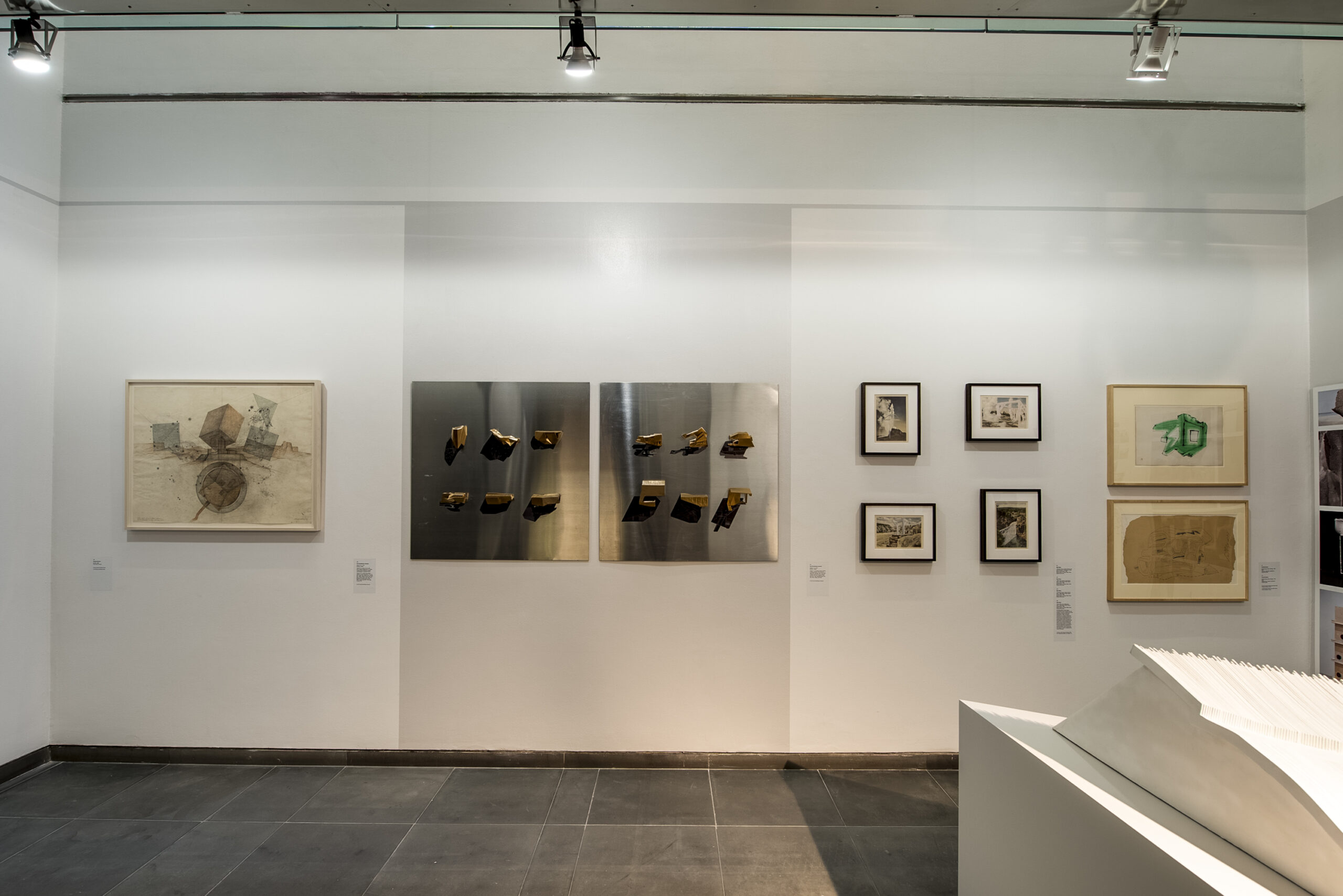 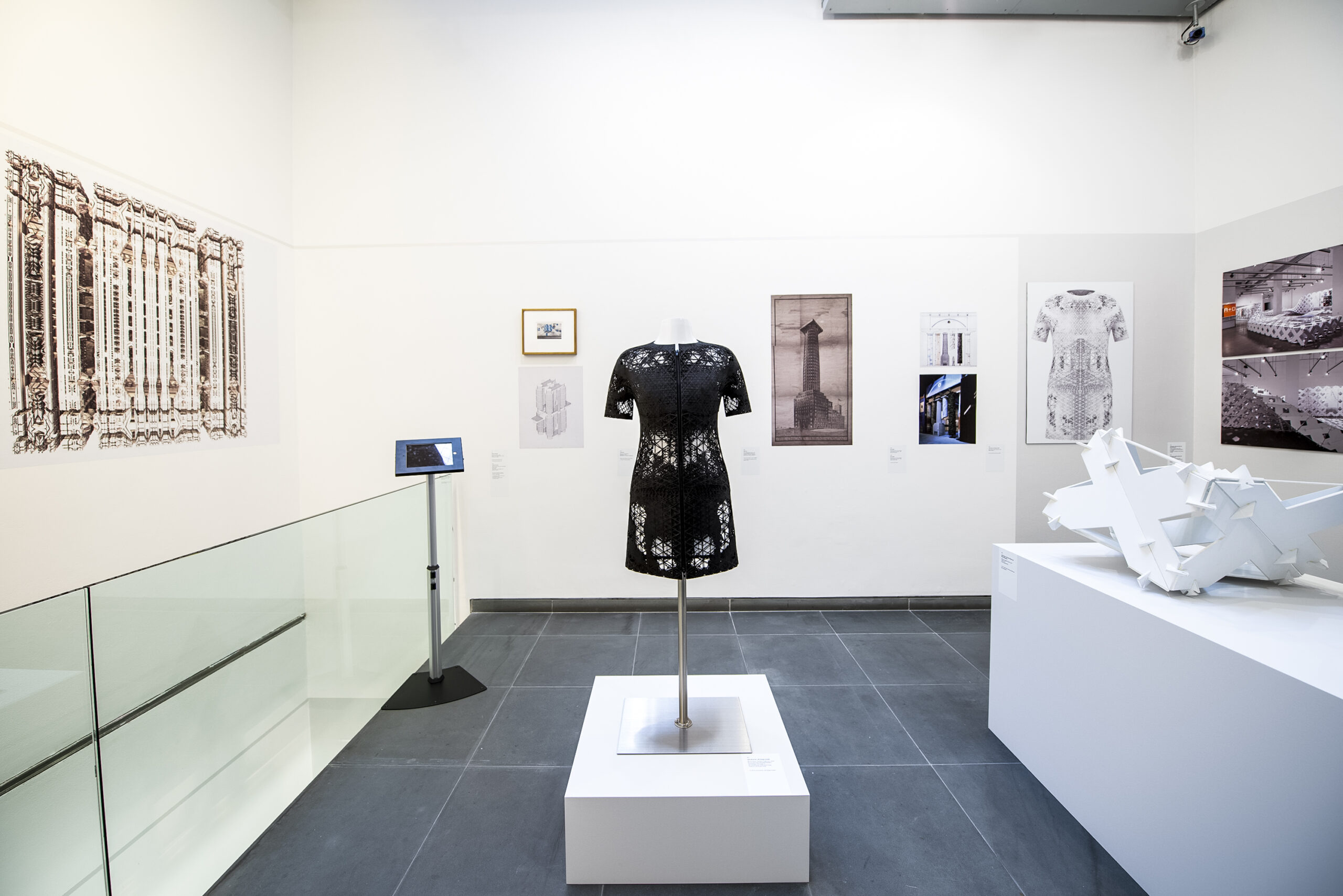 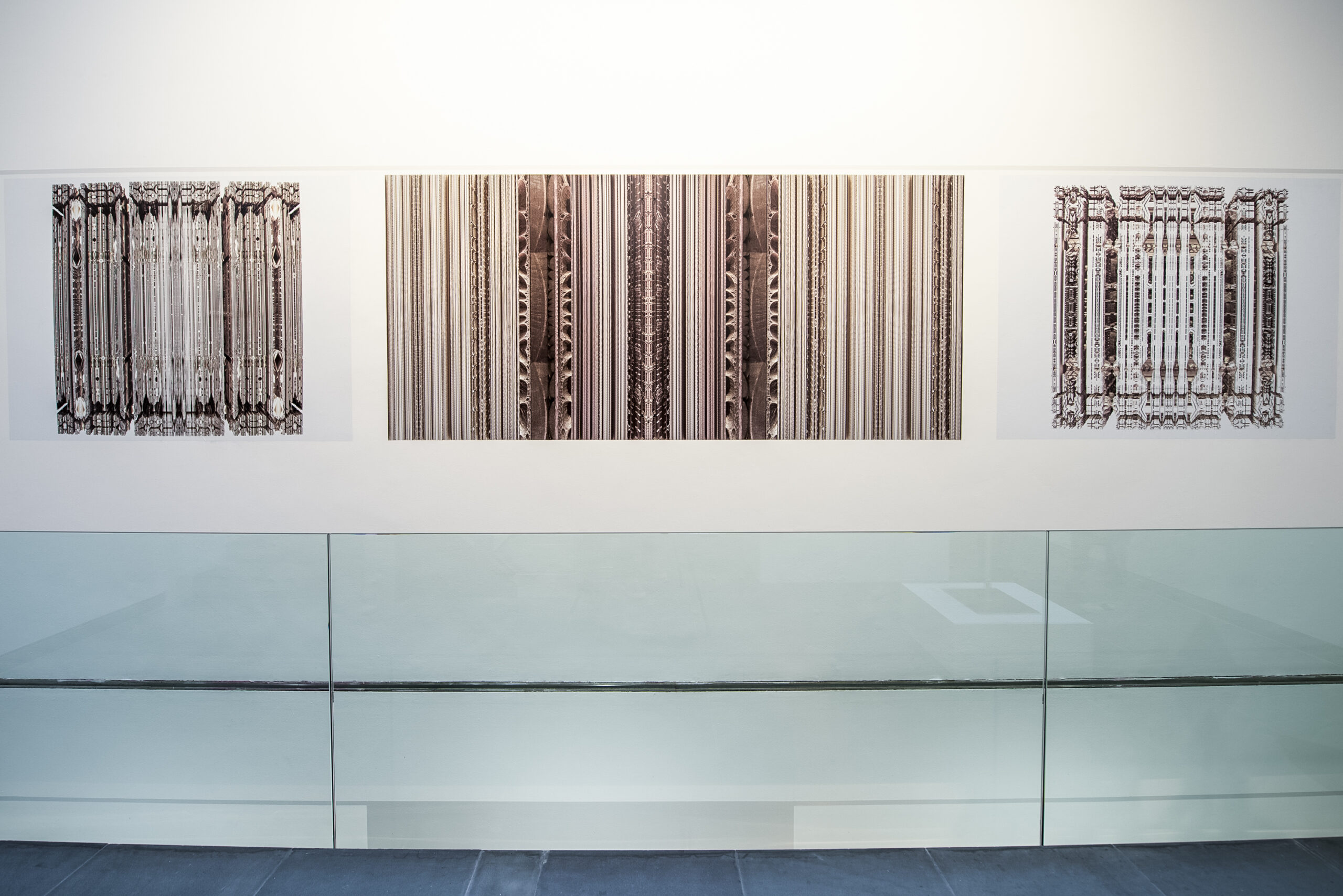 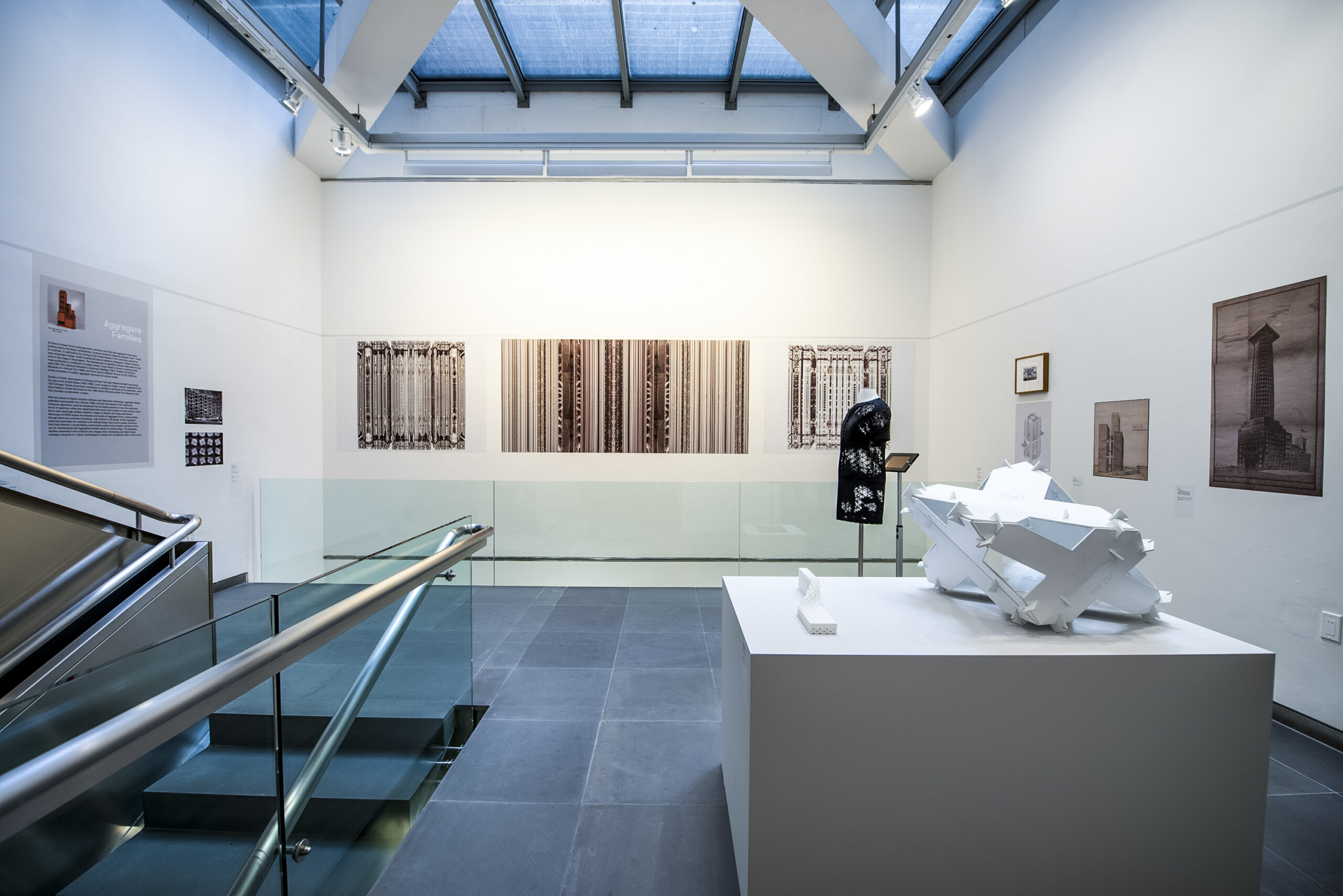 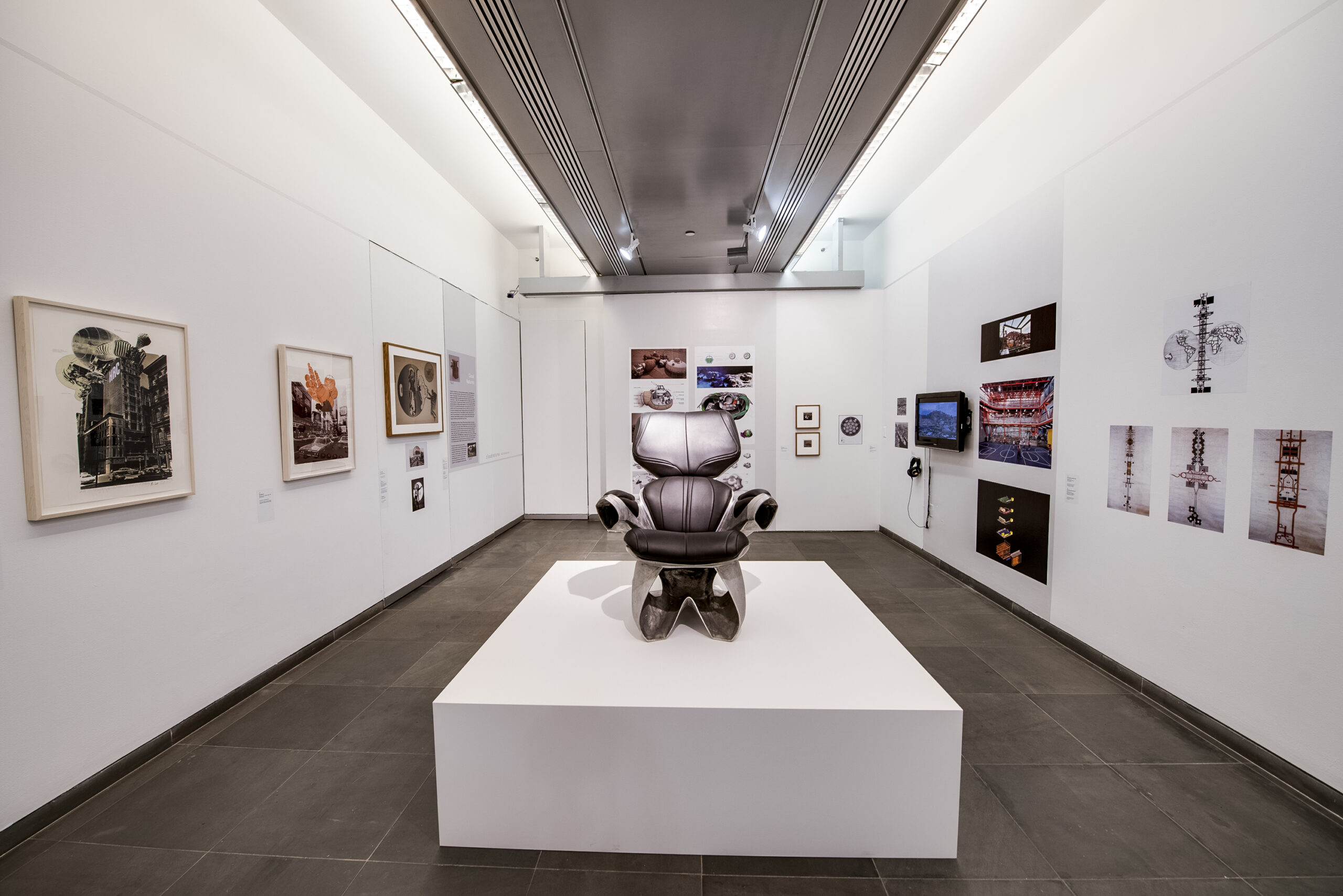 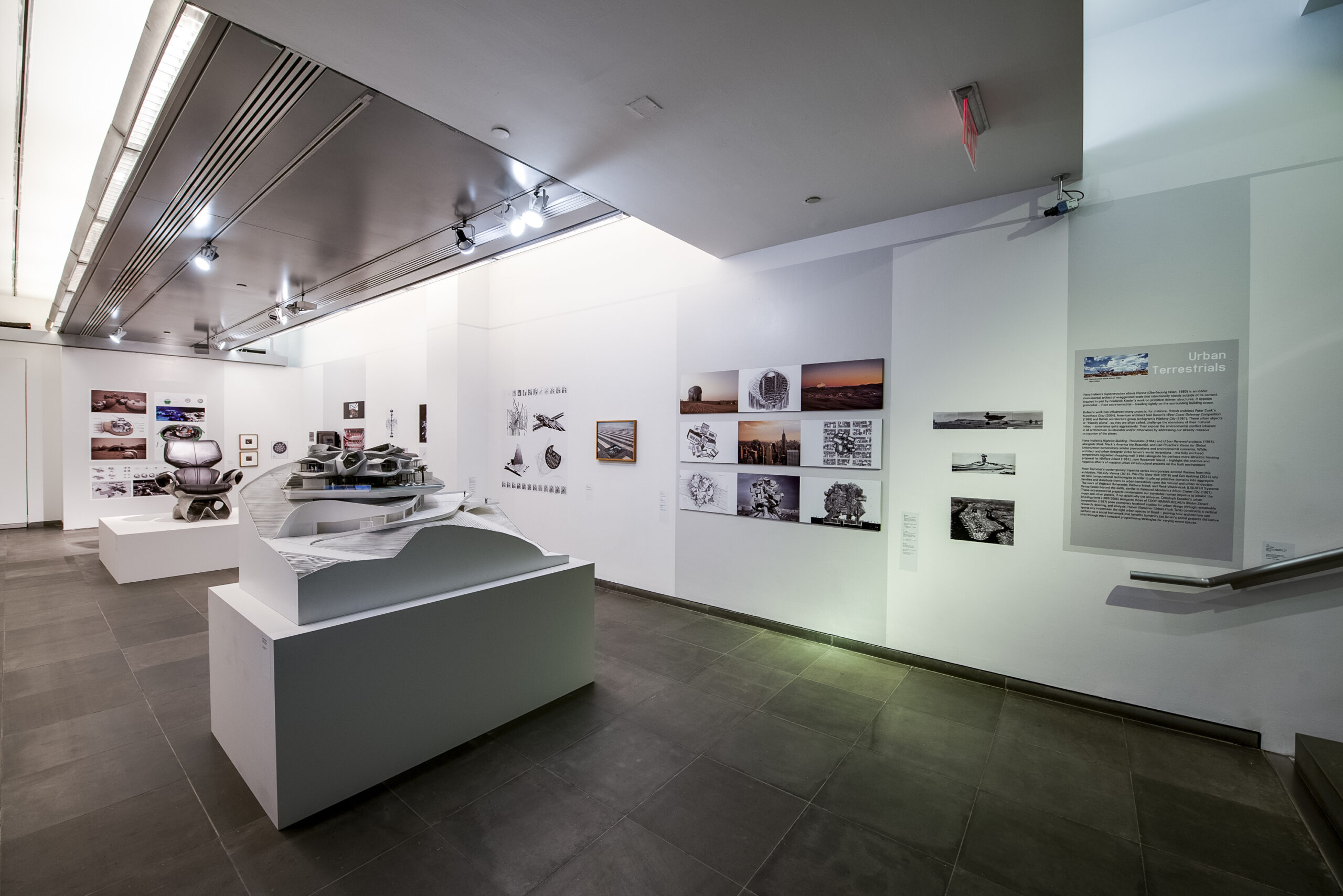 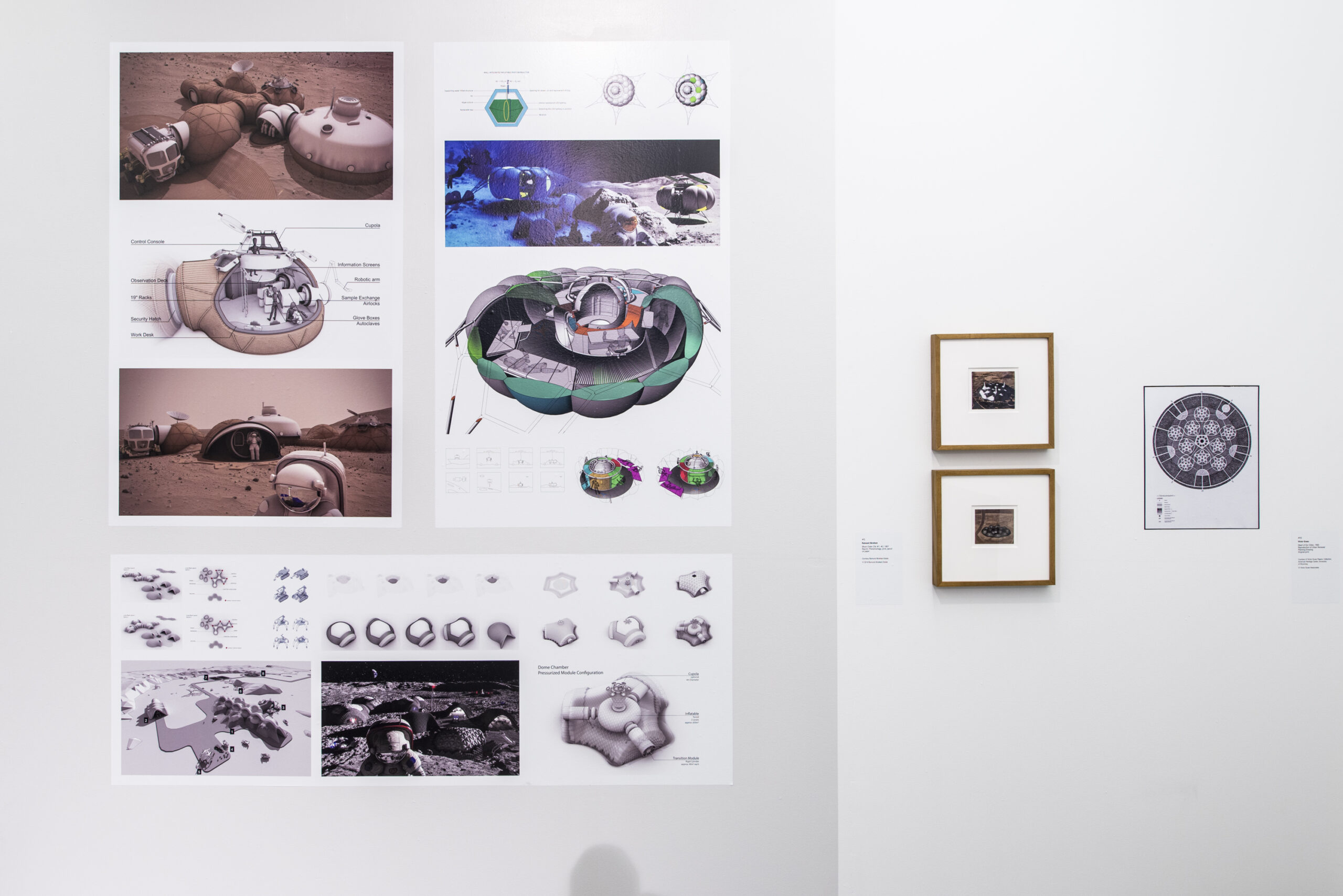 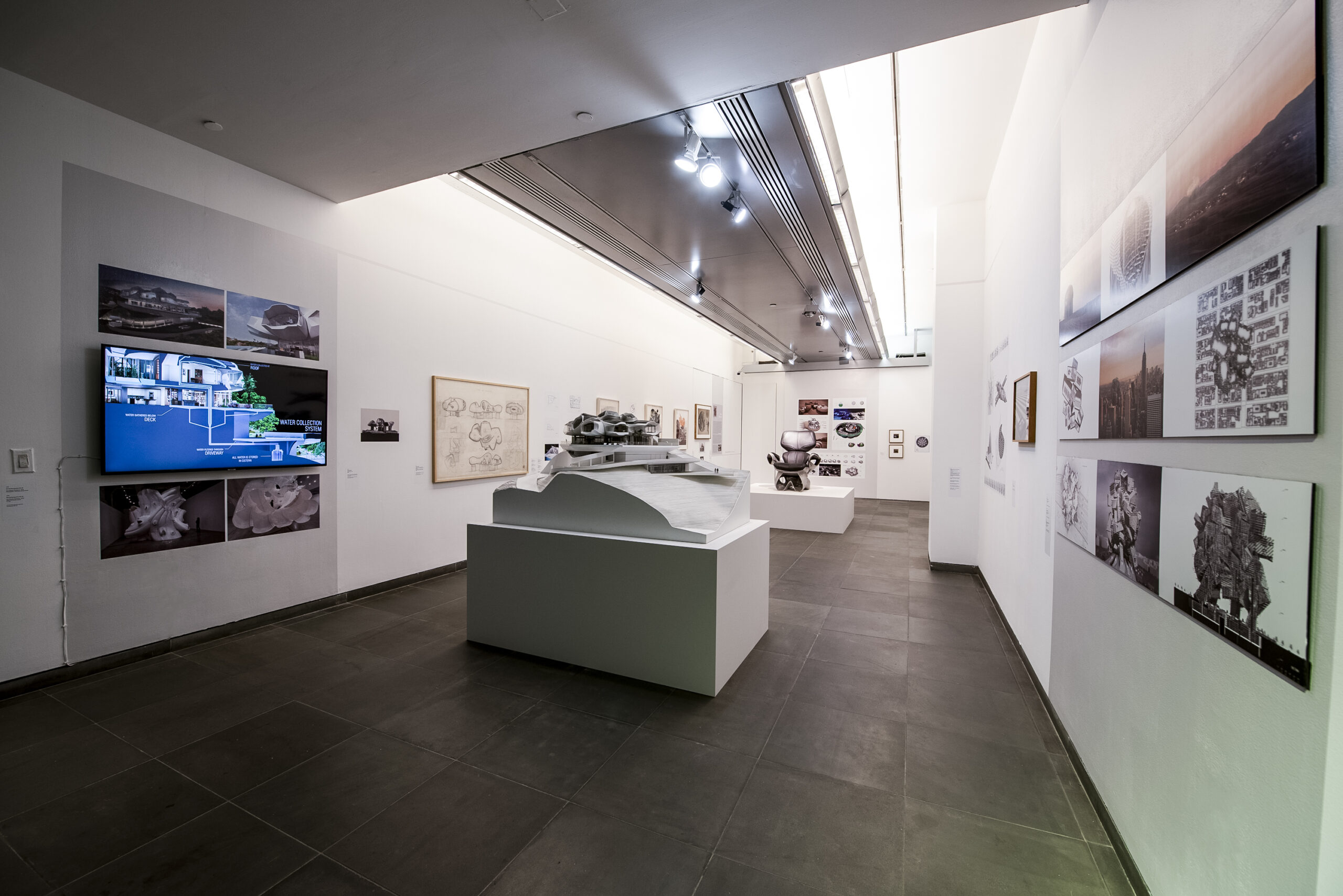 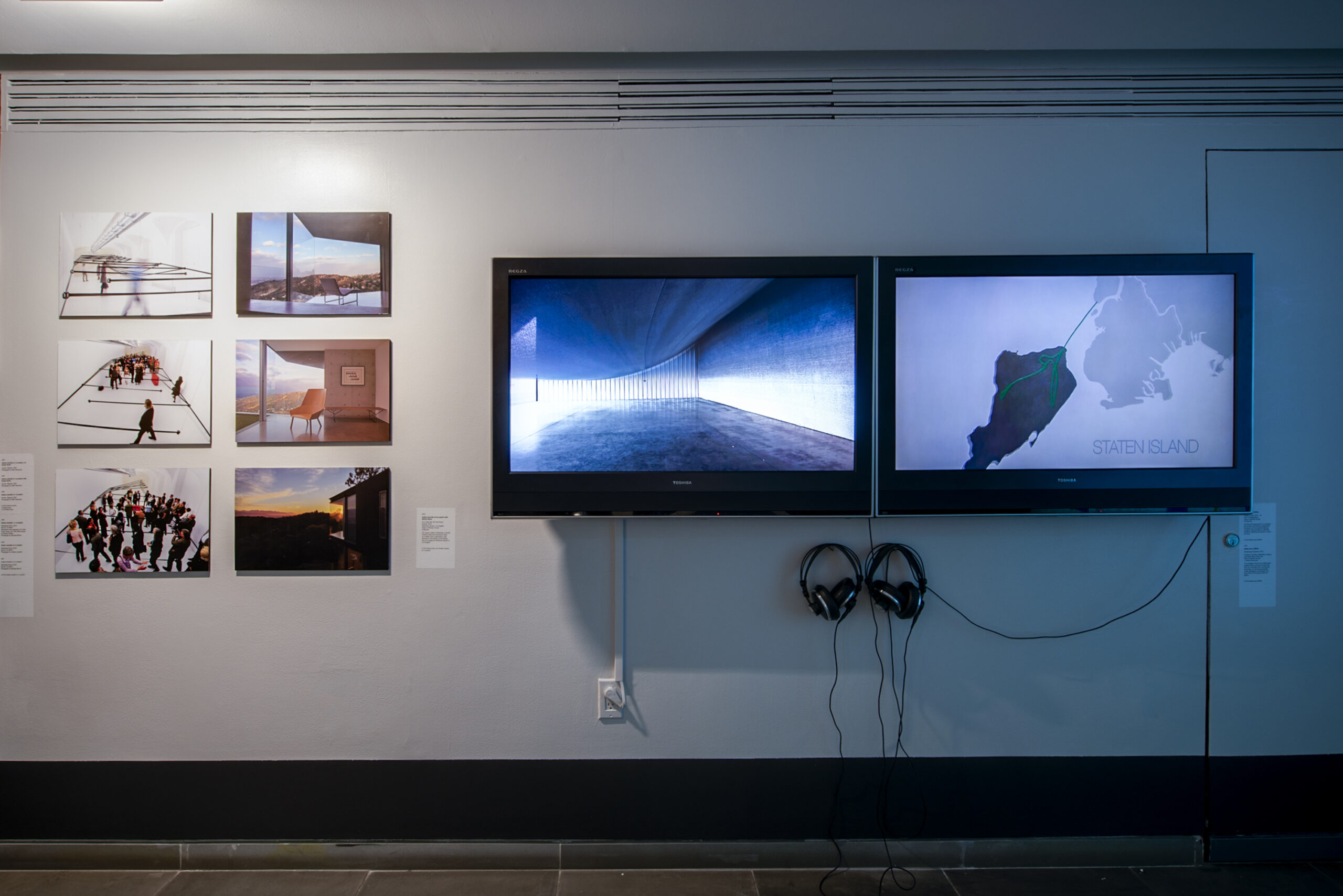 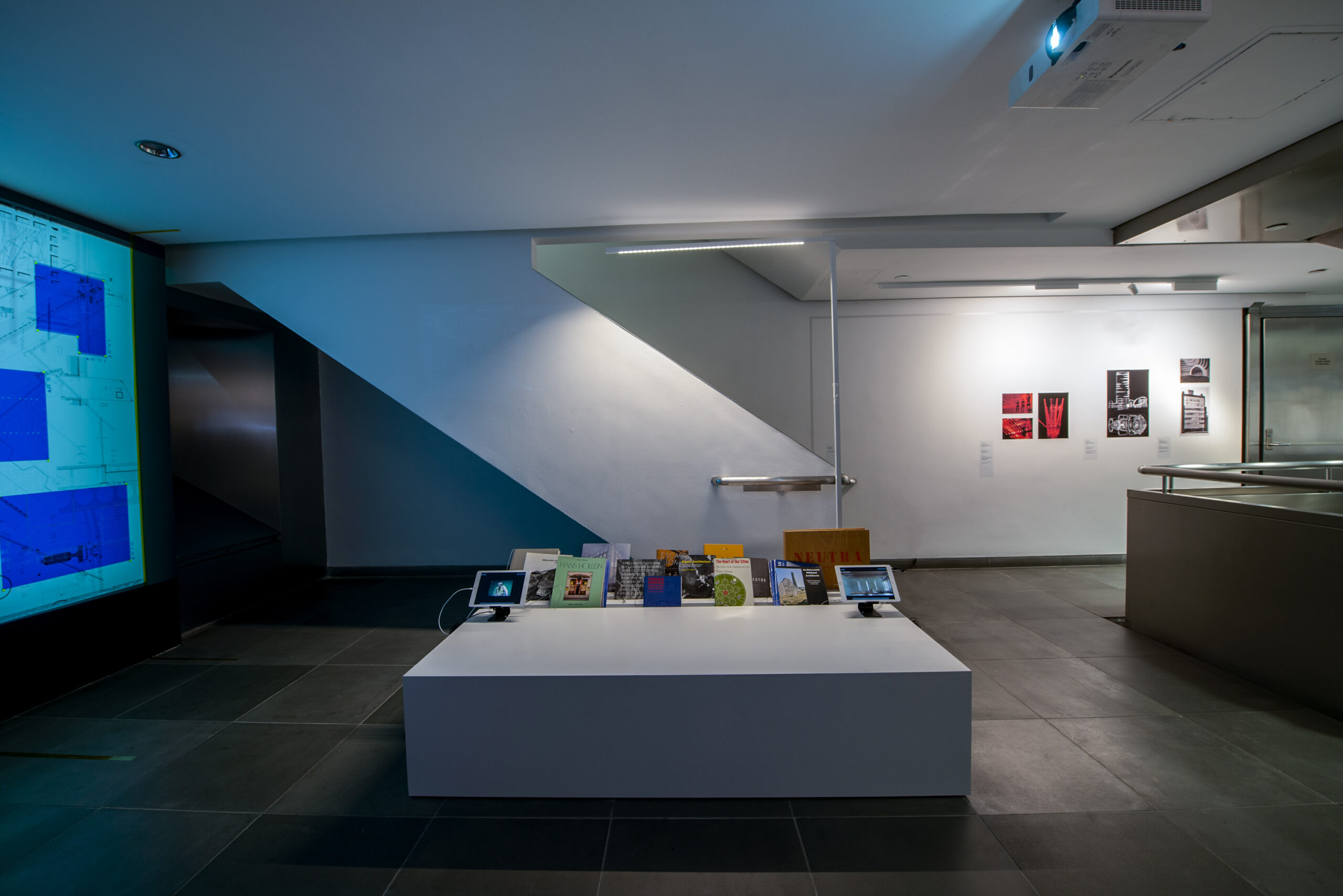 Three-dimensional architectural form is most commonly derived from geometric primitives: squares, spheres, cones, and cylinders. They are fundamental building blocks. In his photograph Metamorphosis (1936), Herbert Bayer emphasizes through surrealist collage how these basic solid geometries are situated within the natural domain.

Architecture and its relationship to the natural environment is a common theme in modern and postmodern design. Adolf Loos’s buildings often appear from the exterior as simple geometric primitive figures with a lack of ornament. Ella Briggs brings a similar geometric simplicity to her modern social housing projects. Both Rudolph Schindler and Richard Neutra, however, upon arriving in Los Angeles, worked on dissolving primitive geometric volumes – similarly to Loos and the complex interiors of his famous Raumplan or space plan.

Neutra’s and Schindler’s approaches however, differ greatly from each other. Neutra constructs his Stone-Fisher Platform Houses (1962-1966) as simple boxes cantilevered off hillsides, whereas Schindler’s earlier Wolfe House (1928-1931) epitomizes his idea of cascading buildings into the landscape with more integration. Schindlers’ more sensitive environmental approach preceded Frank Lloyd Wright’s Fallingwater (1939). The Schindler House (1922), the Lovell Beach House (1926), and the Lovell Health House (1927-29) are some of the earliest iconic precedents of modern design. They inspired mid-century modernists, such as Elizabeth Close (Duff House, 1955), Liane Zimbler (Candianides Residence, 1961), and Charles Paterson (Boomerang Lodge, 1961), among others.

This focus on primitive geometry and its relationship to the environment is also crucial for postmodern generations. Both Carl Pruscha’s housing designs (1970-72; 1988-91) and Raimund Abraham’s For Una (1995) utilize minimalist geometry to signify that architecture can appear both sacred and profane. Mark Mack’s rectilinear constructions for his Watertables & Other Nature Constructions (1980), also challenge modern notions that human construction can dominate the sublime natural landscape.

Similar to Frankl, skyscrapers in Chicago and New York also influenced Adolf Loos during his stay in the United States (1893-1896). Loos’s tongue-in-cheek “column” proposal for the 1922 Chicago Tribune skyscraper competition is perhaps a caricature of his sentiment, while Hans Hollein’s Strada Novissima for the 1980 Venice Biennale exhibit The Presence of the Past provides a postmodern critique.

With the advent of digital computer software and fabrication technology, aggregate design exploded exponentially from the late 1990s until the first decade of the millennium. Computer algorithms could be introduced into the design process to vary the systematic forms of repetition, while new digital fabrication tools were created to mass-produce serial forms with seemingly endless variation. Images by Matias del Campo and Sandra Manninger of SPAN explore the intensity and variety of aggregate forms, made possible through advanced computer technology. Julia Koerner’s (JK Design GmbH) aggregate patterned assemblies for exhibition and clothing design have proven equally innovative. And Duks Koschitz’s curved folding constructions explore how complex curvilinear forms can be manufactured with aggregated modular panels of varying shape. The Aggregate Families presented in this exhibition also engage newly developing post-digital design strategies alongside A.I. robotic technologies to design and manufacture their constructions.

Hans Hollein’s Superstructure above Vienna (Überbauung Wien, 1960) is an iconic monumental artifact of exaggerated scale that intentionally stands outside of its context. Inspired in part by Frederick Kiesler’s work on primitive dolmen structures, it appears primordial – if not extra-terrestrial – treading lightly on the surrounding building scape.

Hollein’s work has influenced many projects, for instance, British architect Peter Cook’s Kunsthaus Graz (2004), American architect Neil Denari’s West Coast Gateway Competition (1988) and British architecture group Archigram’s Walking City (1961). These urban objects or “friendly aliens”, as they are often called, challenge the monotony of their cultural milieu – sometimes quite aggressively. They expose the environmental conflict inherent in all architecture (sustainable and/or otherwise) by addressing our already massive occupation of the planet.

Peter Trummer’s contemporary tripartite series incorporates several themes from this exhibition. Pile-City Vienna (2016), Pile-City New York (2016) and Sun Building (2016) rely on new computational technologies in order to pile-up primitive domains into aggregate families and distribute them as urban terrestrials upon the natural and urban landscape. The work of Waltraut Hoheneder, Barbara Imhof, and René Waclavicek (LIQUIFER Systems Group) looks beyond the earth, similar to Raimund Abraham’s Moon Crater City (1967). These extraterrestrial projects contemplate our inevitable human impetus to inhabit the moon and other planets, if not eventually the universe. Christoph Kapeller’s urban investigations (1989-2006) alongside those of COOP HIMMELB(L)AU’s Melun Sénart competition (1968) pose exemplary localized studies for urban design through remarkable research, drawing, and analysis. Hubert Klumpner (Urban-Think Tank) constructs a vertical sports city in-between the tight urban spaces of Brazil – proving how architecture can perform as a social framework that benefits humanity (as Gruen’s social projects did before him) through more temporal programming strategies for varying event spaces.

The notion of architecture as a cloud was prominently established by COOP HIMMELB(L)AU (Wolf D. Prix and Helmut Swiczinsky) in their early practice, around 1968. They defined the cloud as a “living organism” that could shift and change over time. Haus-Rucker-Co also created cloud-like bubbles to encapsulate varied event spaces around this time. As featured in their Oasis no. 7 model (1972), nature appears to be held up for exhibition within an artifice of human construction. The project asserts a dreamlike, surreal vision of an idyllic landscape laced with references to 1960s psychedelic experiences. In their work Palmtree Island (Oasis), New York (1971), the natural environment appears in need of protection like the last natural specimen on earth. These environmentalist visions from the 1960s come in many types, but can be seen as challenging the excess of traditional architecture and its relentless forms of urbanism (see works by Ant Farm, Francois Dallegret, Yves Klein, Jeffrey Shaw, among others). If this environmentalism is the reactionary outgrowth of failed capitalist industrial development, Bernard Rudofsky’s proposal for an Architecture without Architects might suggest an alternative post-anthropocentric point of view.

Architecture is a medium that creates an atmosphere; it stages a scenic environment, which affects our body and sets a mood. Frederick Kiesler’s Film Arts Guild Cinema, New York (1929), is an early modern example; Kiesler created expanded cinema by projecting film onto the ceiling and walls. He also used asymmetric graphics to motivate viewers along a path of travel, similar to Herbert Bayer with his famous Bauhaus exhibition at the MoMA (1938). During the modernist period, Joseph Urban was also known for creating rhythmic spatial environments to motivate viewer perceptions, most notably in the Tishman Auditorium of the New School’s University Center, New York (1930).

In our Media Atmospheres gallery, we present works that question and challenge the effects of media, not only on architecture but the human condition. Friedrich St.Florian’s Imaginary Architecture series (1969 and 1970) explores atmospheric lighting effects to construct the image of dematerializing bodies in space. Contemporary architect Andrea Lenardin (a l m project) achieves something quite similar in her Sunset: Delayed installation (2007) by using physical constructions of linear sensibility. In contrast, her project, On a Clear Day You Can Dream Forever (2018, in collaboration with Bettina Khano), creates a complex naturalized temporal setting, using reflective light, material as well as sound to convey relationships between our humanity and the surrounding physical and atmospheric environments. Bettina Zerza (ZERZA) develops some of these lighting and material effects for professional work environments in Planes of Light (2018) and also researches the sounds of contemporary urban society in Streetscape Symphony (2013).

Christoph a. Kumpusch of Forward slash (/), presents the informational atmosphere that surrounds architecture quite differently in his work Detail-Kultur (2016). His original book, here projected as an installation, focuses on the conversation and discoursethat architecture details can construct in the global spaces of mass media.