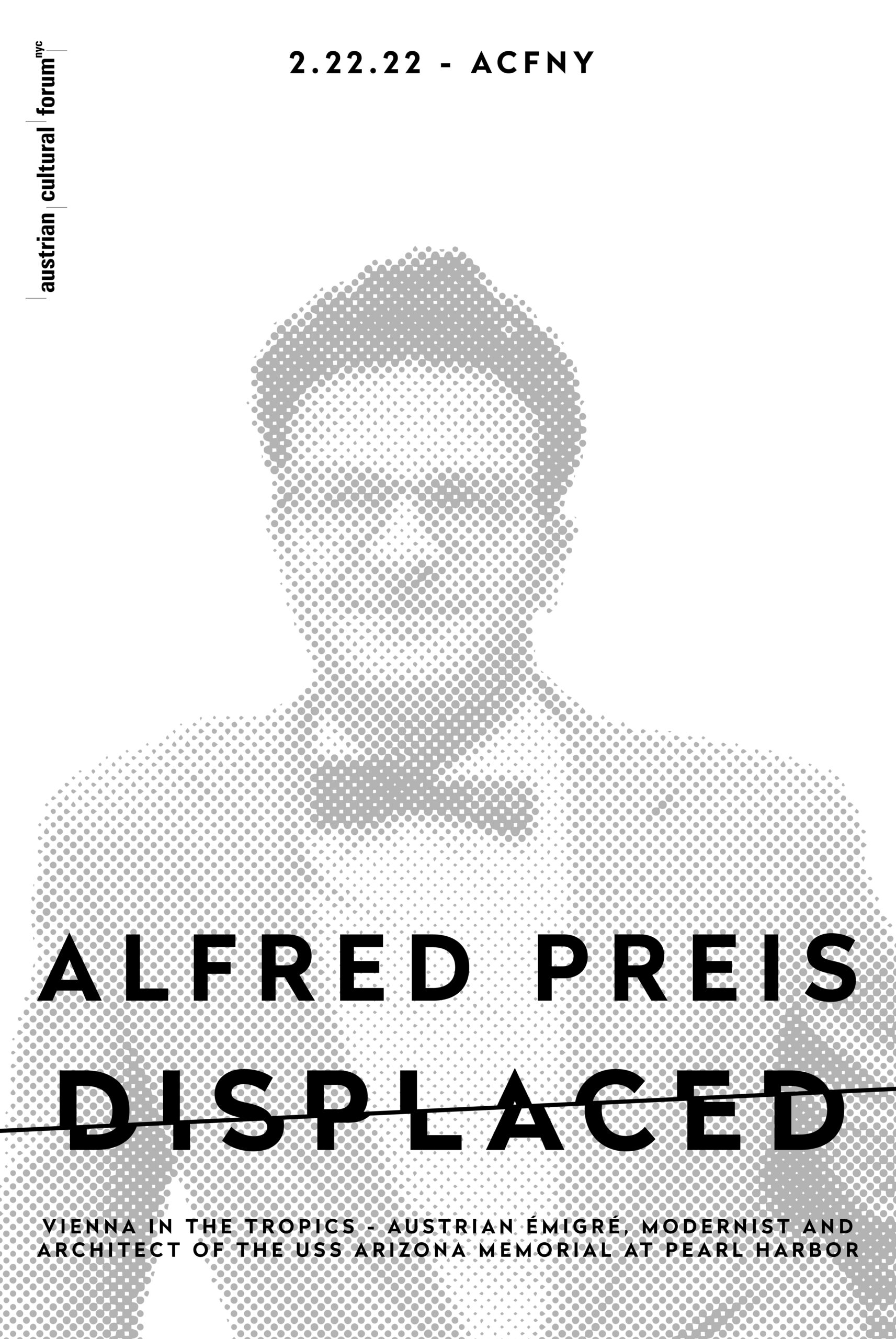 Curated by Axel Schmitzberger, with support from Laura McGuire

The Austrian Cultural Forum New York is pleased to present ALFRED PREIS. DISPLACED – Vienna in the Tropics, a cross section of the visionary work of the Austrian-born US architect Alfred Preis (1911-1994), the architect of the Pearl Harbor Memorial.

The exhibition aims at bringing the architect back into the international spotlight by capturing, illustrating, and contextualizing the wide spectrum and influence of his prolific architectural and advocacy work. It is curated by Axel Schmitzberger, with contributions from Laura McGuire. Axel Schmitzberger is an Austrian architect based in California and Hawai‘i who co-curated the exhibition RESIDENT ALIEN – Austrian Architects in America at the Austrian Cultural Forum New York in 2019/2020. Laura McGuire is a Hawaii-based historian who currently works on a comprehensive Alfred Preis biography. Her prior research includes fellow Austrian architects Friedrich Kiesler and Adolf Loos.

The exhibition consists of 35 selected projects which foster an intellectual dialogue of the past with the local conditions on the ground that Preis liberally embraced. The result is a vivid expression of vernacular modernism that sets his work apart from contemporary exiles on the mainland. The show touches on the historic, theoretic, and cultural nuance of this exchange that has freed Preis to reference and reinterpret past architectural inquiries while generating innovative ideas and practices relevant even to the technology and culture of ambitious contemporary design.

THE LIFE AND WORK OF ALFRED PREIS

The life story and work of the Austrian-born US architect Alfred Preis (1911 -1994) is a fascinating one: Born, raised and educated as an architect in Vienna, Preis had to flee from Nazi-occupied Austria in 1939 and emigrated to Honolulu on the paradisiacal island of O‘ahu in the US territory of Hawai’i. Briefly detained as an “enemy alien” after the US entered World War II, he emerged as one of Hawai’i’s leading architects in the 1950s and 60s. His celebrated career spanned over twenty-four years and comprised approximately 180 built projects ranging from residences, schools, and parks to the famous U.S.S. Arizona Memorial at Pearl Harbor. Throughout his active years he not only pioneered an unprecedented advocacy for the environment and arts but also distinctively merged Viennese modernism with Hawai‘i’s cultures and climate, forging intriguing novel idioms for modern architecture and design in the tropics.

Preis’s decision to leave architecture behind – at the peak of his career – and to dedicate himself to his advocacy role as founder and president of the State Foundation for the Culture and the Arts in Hawaiʻi (1963 to 1980), and the Alliance for Arts and Education (Hawai‘i Arts Alliance) after 1980 until his death in 1994, increasingly removed him from the eyes of critics and historians. Alfred Preis had a long and intertwined career, and his remarkable body of work is in large parts destroyed, endangered or difficult to document. Divided in six chapters titled “Refugee”, “Apprentice”, “Developer”, “Spacemaker”, “Advocate”, “Art Czar”, the work and life of Alfred Preis is captured through texts, original and new photogpraphy, as well as reconstructions and drawings. With his architecture as central focus, the exhibition seeks an opportunity to highlight his built work to a larger audience and acknowledge the bi-cultural exchange between Austria and the US state of Hawai‘i.

This exhibition on the work and life of Alfred Preis is sponsored by and organized under the auspices of the Austrian Consulate General in Los Angeles as part of a program series highlighting the major contributions of Austrian émigrés from Nazi-occupied Europe to US culture. It follows an earlier online exhibition: Alfred Preis home | Online Exhibition (online-exhibitions.at).